This spoilerific review of Captain America: Civil War begins with a personal anecdote. After we left the cinema, I had to run down an escalator to catch a Metro arriving in under a minute. I was in time to block the sensors to allow two of my party on, but the last was still too far away when the automatic doors began to shut. So I quickly pushed apart the closing doors with all my might rather than abandoning her. No woman left behind! I was wearing an Iron Man t-shirt, so it was reminiscent of the scene where he pushes a set of heavy duty doors apart. This was only the second time I’ve instinctively performed this heroic feat. We now return to your regularly scheduled film critique.

You used to need to wait decades between movie remakes, but the Hollywood nostalgia machine has been exponentially speeding up this process. It’s only been a couple of months, but Marvel has already remade Batman v. Superman: Dawn of Justice! Alright, it’s more like an Armageddon/Deep Impact situation. But if you’ve seen BvS:DoJ, then you’ve basically seen IMvCA:DoV. This is the superior iteration, but it’s still an infuriatingly flawed premise.

It begins in Lagos (a big improvement over “African coast” in Avengers: Age of Ultron), where Scarlet Witch’s intervention inadvertently causes Crossbones’s suicide vest to blow up a different bunch of bystanders. (It’s still a far smaller body count than the Stamford explosion that incited the terrible crossover the movie is named after.)  As a result, the UN wants the Avengers to sign onto its supervision via the Sokovia Accords. Nobody cares that they saved countless more lives by by preventing Crossbones from unleashing a bio-weapon. Iron Man’s punchfest with the Hulk through an unnamed African city incited by Scarlet Witch was conspicuously absent from the evidence of reckless endangerment presented against the team.

Despite being an anti-authoritarian mad scientist, Iron Man is the Sokovia Accords’ staunchest proponent because Alfre Woodard guilt trips him about her son being collateral damage in Sokovia. (She’ll play a completely different character in Luke Cage, just as Tony Curran was King Bor in Thor: The Dark World before becoming Irish torture mobster in Daredevil’s second season. I guess it’s still not as credulity breaking as Stan Lee’s cameo streak.) A: AoU had a ridiculously extensive sequence where it looked like the Avengers saved absolutely everyone besides Quicksilver in Sokovia, so it’s very jarring to suddenly have it presented as a Pyrrhic victory. Once I got used to this revision, however, I appreciated that they finally added consequences to that consequence-free sequel. So if you hate current movie Superman for not being able to save everyone in Metropolis during General Zod’s attempted global genocide, now you have to hate the Avengers too!

Then an attack on the ratification of the Sokovia Accords, seemingly by Bucky, kills Black Panther’s dad. This is when Captain America completely forfeits the moral high ground by assaulting police trying to bring Bucky to justice. Somehow he manages to convince half the Avengers to help him keep a known assassin & suspected terrorist out of custody. Even worse, after being trolled by Joss Whedon at the end of A:AoU, he still doesn’t shout “Avengers assemble!” After learning Zemo was the real bomber & where he’s headed, Captain America still refuses to share this vital information with the authorities. His biased actions completely support the Sokovia Accords.

The two sides of the Avengers’ ideological conflict felt much more high stakes in the comics where the Superhuman Registration Act press-ganged hundreds of superhumans. I understand Captain America’s reservations, but government oversight for just a dozen superheroes doesn’t sound completely unreasonable. It’s quite awkward that the unreferenced rise of the Inhumans & Hive’s return on the small screen feels like it’d be more suited to Avengers involvement. (Although even it feels like a cover version of X-Men: Apocalypse with Hive having four acolytes & a bonus mad scientist that’s not Mr. Sinister or the High Evolutionary. R.I.P. Alisha the Ginja. Hellfire is the season’s best new character. Kudos to Briana Venskus for getting gigs with both the DEO & SHIELD!) The film’s conflict feels so petty &  low stakes in comparison.

Like DC’s movie, this has ton of characters but has the advantage of having already introduced most of them. Vision’s & Scarlet Witch’s relationship is a standout. Unfortunately they don’t look like they’ll be having children made from shards of Mephisto’s soul anytime soon. Sharon Carter still seems under-cooked, doubly so if you ship Stucky. Everett K. Ross is neither called The Emperor of Useless White Boys (One day that title will be mine!) nor does he sell his soul for pants, so he’s even more pointless. Black Panther steals the show as its Wonder Woman equivalent. Chadwick Boseman, much like Elizabeth Olsen, is an American doing an impeccable accent for a nonexistent homeland. Even briefly armed with a new super-baton, the MCU continues to humiliate War Machine. Much ado is being made of Spider-Man being in a movie with Captain America, but  3 Dev Adam did it better. This Spider-Man is a fake nerd boy for not using accurate Empire Strikes Back terminology during battle.

The action sequences are my favorite parts of the movie. They have an edge over BvS:DoJ for being filmed in daylight & not forcing us to endure lots of ponderously dull scenes betwixt. Not only does its airport charge evoke the opening credits the X-Men cartoon, the Russo brothers later homage an iconic Civil War cover unlike X-M:DoFP. Ant-Man being launched on Hawkeye’s arrow & becoming giant-sized were fantastic moments Ant-Man & the Wasp will have a tough time topping. Falcon continues to be a surprisingly delightful combatant with his new Redwing drone. After five solo films, Spider-Man’s antics aren’t spectacular enough to justify shoehorning him in. Vision & Scarlet Witch would’ve made a great power couple if the were on the same side.  Why can’t we ever get fight scenes this awesome against supervillains?

The problem with these otherwise fun battles is that it makes all the heroes into colossal jerkwads for not peacefully sorting out their issues. That core theme from the Civil War comics should’ve been lost in translation. Both Avengers movies featured foes pitting the team against each other, so it’s not even a novel plot for the MCU. If the Avengers turn on each other so frequently & easily, the world deserves a better superhero team. I recommend the Thunderbolts.

Iron Man eventually learns the error of his ways once Zemo blows his own cover. He’s all set to join Captain America for the traditional third act fight against the real villain in these stories, until Zemo shows Iron Man an improbably convenient video of Bucky killing Howard & Maria Stark. Then it’s Avenging O’Clock because IRON MAN’S PARENTS ARE DEAD!!! Iron Man refuses both Bucky & Captain America  mercy since neither of their parents were named Maria. Bucky’s left arm being blown off again by the uni-beam was neat-o! Captain America ends up winning because his name is in the title.

Daniel Brühl is solid as Zemo, except he barely has anything in common with Baron Zemo. Instead of being an ostentatious Nazi aristocrat, he has the same motivation as Quicksilver & Scarlet Witch from the last Avengers flick. This Zemo is a family man with a spec ops background like half of the MCU, making him feel too ordinary. His regal attire is sorely missed. Since earlier movies nixed his involvement in Bucky’s death (that ought to have be permanent), they’ve made him the killer of Black Panther’s dad. That’s usually Klaw, so this reshuffling seems strange given that he’d already been introduced. Fortunately they leave the somewhat victorious Zemo alive at the end so he can still return as the leader of the Masters of Evil, though that’d require the MCU to have lots more recurring supervillains. The newest Lex Luthor got his hair appropriately shorn after achieving his goal, but Zemo still doesn’t get a magenta ski mask glued to his face!

Black Panther’s costume would’ve been perfect if if his silver accents were gold. I’m very disappointed after all these movies we still haven’t had scale mail for Captain America (the promos lied) , golden Black Widow gauntlets, Hawkeye’s mask, or Scarlet Witch’s iconic tiara. Scarlet Witch wears an upsettingly high volume of non-red clothes. I preferred Ant-Man’s prior costume with the belt buckle & no gray. After getting it right in Sam Raimi’s trilogy & The Amazing Spider-Man 2, Spider-Man’s suits were lackluster here. It looks like they lazily added superfluous blue lines within his red sections just to make it different for merchandising. At least more effort was put into making the unduly maligned The Amazing Spider-Man design distinct from the classic look. I don’t care for his contracting lenses even if Iron Man engineered them in under a day to help him focus. Zemo is the worst dressed because he doesn’t even get a costume!

Speaking of Baron Zemo, I was disappointed that Hasbro’s Marvel Legend was made in an ugly modern costume. This is inexplicable since they’d just made a Marvel Universe one in his classic outfit. So I was forced to customize it. To class up his gauche dishwasher gloves, I concealed his floppy cuffs with extra ermine trim. This is exactly the type of inaccuracy I’d at scoff at on others’ customs, but this time it’s okay because I did it. 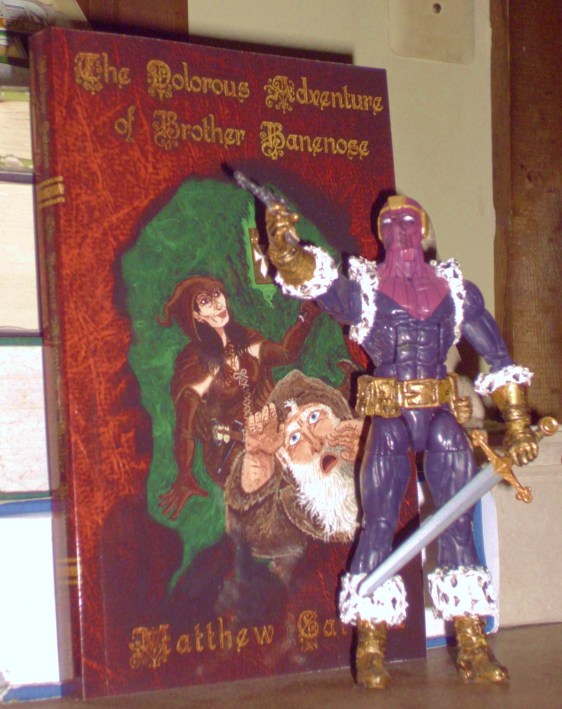 “Hand over the movie’s costume designer, or everyone gets hurt!” 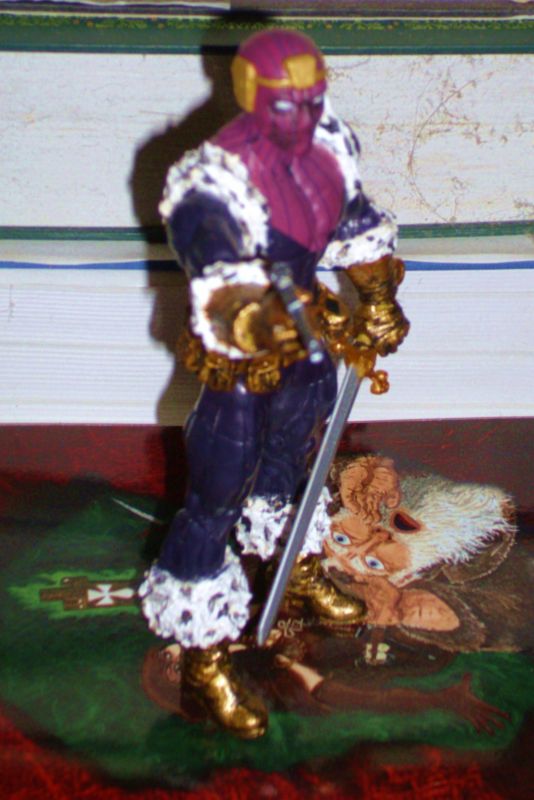 Although this retroactively added weight to A:AoU,  it still ends in a typical Marvel holding pattern instead of the promised Phase 3 game-changer. Captain America still leads the unchecked Avengers sans Iron Man in a new base. Bucky decides he’s better off being imprisoned until his brainwashing is expunged, which could’ve happened much earlier in the movie. Even Captain America & Iron Man appear to reconcile during the denouement rather than maintaining an epic blood-feud for the coming sequels. There were rumors the film was going to end with end with the assassination of Captain America & Falcon, Bucky, or Sharon taking up his shield. Now that would’ve been a momentous way to end this trilogy (even if he would be resurrected for Infinity War)! It’d also be an additional point of symmetry to BvS:DoJ. Aside from introducing a few new characters to the ever crowded MCU, it doesn’t feel like it accomplished much.

Captain America: Civil War is definitely the better movie about superheroes being manipulated into irrational battle royales against each other this year. That’s still two of them too many.

Now that’s you’ve made it through that long review, don’t forget to buy my book before it goes out of print! You’ve only got until May 31, 2016, to conjure The Dolorous Adventure of Brother Banenose  into your collection!