This installment is a tad late because I spent the week writing two brand new chapters of my difficult second novel. That brings the tally all the way up to a whopping four! Let me know if you’re interested in learning more about my process in future entries. Now let’s proceed to my SPOILER review of Amazon’s The Tick pilot & updates on the best kitty this side of Behemoth!

The first attempt at a live action The Tick was underwhelming because it skewed more towards sitcom for lack of  a budget for superhero hijinks.  Amazon’s The Tick is disappointing in the opposite direction. This show takes itself way too seriously. It feels like yet another standard superhero show (Can you believe we’re now at a point where we’ve got so many to choose from?) that just happens to have the Tick in it. So far this show is just playing superhero tropes straight rather than comically sending them up. (The Ninja Hedge would be topical again thanks to Netflix’s Daredevil.) Where has its absurdist satire gone?

The Tick shouldn’t be the only zany part of his world. The fun thing about the concept is that The City is lousy with lousy superheroes. I don’t get the impression we’ll see goofy gimmick superheroes hanging out at diners or The Comet Club in-between being bested by criminal mastermind Chairface Chippendale any time soon in this series. What few other superheroes we do see in the pilot are so generic.  How much more interesting would it be if bland Superman analogue Superian was Mighty Agrippa, Roman God of the Aqueduct or Barry Hubris the “original” Tick? (Barry doesn’t even appear in the superhero wiki-database when Arthur searches for “The Tick!”) Why bother with Flag Force Five when the Decency Squad & the Civic-Minded Five already exist? (I guess the upside is these teams are alive to appear later.) It needs a vain yet craven Die Fledermaus or Bat-Manuel type (the TV rights to ersatz Batmen are tricky) to contrast with the Tick & Arthur.

Peter Serafinowicz puts in a good performance the titular blue titan, but he has the legacies of Townsend Coleman & Patrick Warburton against him. Some of his delivery seemed too fast & sarcastic. He still gets the best dialogue, but the episode was so gritty that Tick’s ramblings felt tacked on rather than the zenith of its kooky spirit.The scene where bullets bounce off him was cute & a welcome action upgrade from the last adaptation, but it still wasn’t enough. Whereas the previous live action Tick costume missed the built-in mask, this one is missing his distinctive lantern jaw. A jaw prosthesis really should’ve been part of the costume to give Serafinowicz the most heroic visage possible. For a comic book character with so few details, why can they never get his face perfect?

Arthur is more of the central character, & he is a depressing PTSD mess after watching his dad die during a superbattle. Now he’s investigating a sinister conspiracy by the killer too. Arthur doesn’t need a tragic origin! (The Tick comics weren’t quite as upbeat as the cartoon, but Oedipus getting non-fatally stabbed was its darkest moment.) Wasn’t it enough that now even Barry “The F-Lash” Allen became a superhero to avenge a dead parent in the comics & TV? Not every superhero needs to be Batman! It was more novel when Arthur just decided to wear a costume without a personal tragedy motivating him. He doesn’t even choose the moth suit; the Tick foists it upon him.

How did the Tick know were Arthur lives? One theory is that the Tick is a figment of Arthur’s imagination made into an independent corporeal being like Abbey from Misfits. This would be like Dr. John Watson imagining Sherlock Holmes into existence. (Jeremy Brett really should’ve gotten awards for being Sherlock Holmes.) This is suggested by a blue nightlight talking to Arthur in the Tick’s voice, although it could just be a dream instead of a childhood flashback. Creator Ben Edlund has directly called the Tick a parasite, so maybe this version has the power to psychically leech onto Arthur’s mind instead? Or perhaps there is no explanation because it’s a continuity error? The mystery of the Tick is going to be a big piece of Edlund’s proposed multi-year masterplan, but I’m not convinced we needed a massive reinterpretation of the Tick to begin with since a complicated backstory doesn’t subvert genre expectations. I’m fond of “The Luny Bin” where it reveals that instead of being a guy in a costume with an origin story, the Tick is simply the Tick. I’d be delighted if that was what these possible red herrings were leading up to, but I imagine everybody else would feel cheated.

One change that I am in favor of is Dot, Arthur’s sister, being an EMT. She’s not down with Arthur being a superhero, so she could sometimes come off as a nagging buzzkill in other versions even though she’d be correct if The Tick was set in the real world. Making her an EMT transforms her into a heroine in  her own right & will make her criticisms of her brother’s life choices feel more constructive. It seems like upgrading her characterization, however, also resulted in her being cast with a more conventionally attractive actress than I’d expected. She & Arthur were supposed to be the most decidedly average-looking people out of everyone. It was keen she had a successful romance with (Dinosaur) Neil in the cartoon without looking like a typical rom-com star.

If anything, the first episode was too tonally consistent. Director Wally Pfister, cinematographer to Christopher Nolan’s pretentious Batman movies,  grounded everything so that even Edlund’s jokes fell inert. The Terror’s ship looking like a flying Titans’ Tower isn’t inherently hysterical, especially when its appearance is surrounded by multiple traumatic homicides. The Terror remains a mean old coot (Jackie Earle Haley is always fantastic), but merely blinding Flag Force Five & shooting them in their faces felt so pedestrian. They missed a golden opportunity for giving them a ludicrous death that you could only get from a superhero comedy. Shooting your enemies in the face may be effective, but it’s not whimsical escapism. It comes off like cynically laughing at comic books rather than laughing with them. The only genuinely funny part in the entire episode was when The Terror stole Arthur’s ice cream because I am a terrible person. 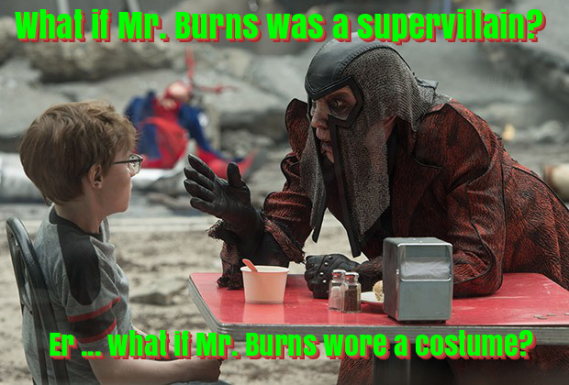 This new version of The Tick definitely does things differently than the prior adaptations, but in doing so it feels homogenized. It has better production values than the Tick’s last TV outing but with even less of its unique charm. Just because Ben Edlund can make a dour version of The Tick doesn’t mean it’s worth paying to watch it as an ongoing series. You might as well watch it yourself for free & tell Amazon if you agree with me.

Bokeem Woodbine is the Shocker! I’m more excited about this than Zendaya being Mary Jane since he was great in Fargo. He had better dress like a quilted pineapple!

The MCU is kicking itself for not using Ursa Major & the rest of the Winter Guard before Russia releases its Guardians movie.

The Gambit movie has been sent back to Development Hell because director Doug Liman has signed on to do the Justice League Dark movie instead. Supposedly it’ll be released as Dark Universe to explain the DC Cinematic Universe’s cinematography. (Shadowpact would be a better title than either of those, even if it he final product doesn’t include Detective Chimp.) If they’re still using Guillermo Del Toro’s screenplay, this may end up being legitimutantly good! tennA urdnehaM rof annataZ!

The lady of the house & I just slew a giant moth that invaded our territory. Then she licked its ichor off the swatter. Not since the Battle of the Flying Ants has been so momentous a fray in this household. The last mouse she ate was pretty thrilling, too. She’s fearsome four! I invited her to the table to try fried calamari. She believes she was invited under false pretenses as it did not register in her food data-banks.

I’ve taken to muttering to myself at the grocery store so that if a film of my life is ever made they wouldn’t need a lot a of obnoxious voice overs. (Glares at Outlander’s Claire.)