Gotham is committed to pitting the Riddler against Penguin. This is a huge bummer since I really enjoyed them being murder besties even if they didn’t hook up. I sympathize with shippers feeling betrayed, but I also understand the writers going with this for maximum drama since it’s the relationship viewers actually care about.  At least it’s making Babs & Tabs more pivotal & finding work for Clayface. You can tell the psychological warfare taking it’s toll because Oswald didn’t even eat the birthday cake of Nygma’s replacement after killing him! Will Riddler cause Disco Vampire to wear a monocle via gratuitous eye violence ala Arkham City? Then they can let eyegones be bygones. Or will they go for the “Penguin doesn’t need a reason to wear a monocle” explanation that nobody had a problem with for decades? 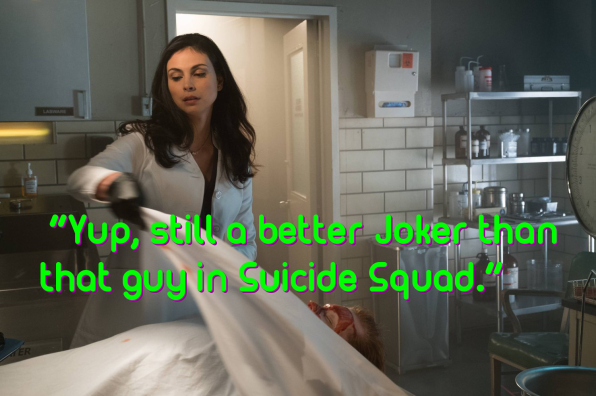 Unexpected fun fact: Dr. Leslie Thompkins is most effective at violating perps’ rights to get intel.

The way that they’re addressing reanimation as simultaneously bonkers & mundane is perfect. I appreciate that they turned the Joker’s face removal in the New 52 from edgy horror into a joke about poseurs. It’s only just returned & already announcing a winter break after next week? You can’t have two winter finales in the same season, Gotham! That’s madness!

Between The Flash, Legends of Tomorrow, Agents of SHIELD, & Taboo, when am I supposed to eat on Tuesdays? LOT may be too earnestly dopey for its own good. George Lucas quits film school for an hour, so Atom’s & (Citizen) Steel’s powers vanish because he’s their inspiration. Except that doesn’t make sense given the series’s only consistent time travel rule is time travelers’ histories don’t automatically change as soon as there’s a time aberration, otherwise nobody would accomplish anything due to constant paradoxes. So this episode made an even larger hash of its already tenuous chronal logistics just to wallow in George Lucas nostalgia. He’s done some wonderful stuff, but his ego is big enough as it is without implying his sci-fi & fantasy films are the only ones that matter. Furthermore Rip Hunter had part of the wish-granting Holy Lance all along but didn’t use it to save his family? Instead he uses it to overwrite his identity with amnesia & new accent, as opposed to anything which might actually be beneficial.

Despite spoiling its twist in commercials & lacking my beloved Speedy, (Green) Arrow was kind of good this week. The lampshading of the Lance sisters’ lives was cute. Good riddance to the horrendous Black Canary monument. I love Felicity being crafty! Her punching out Black Siren was cathartic.  It’s about time Mr. Terrific became useful instead of being a punching bag. I’m glad regular Laurel wasn’t revived, although I wish it didn’t involve Prometheus sneaking Black Siren out of STAR Labs without anyone noticing. Hopefully the Legion of Doom recruits her because three dudes does not a legion make. Instead of introducing another new Black Canary, I’d rather Sara just reclaim her mantle on LOT. 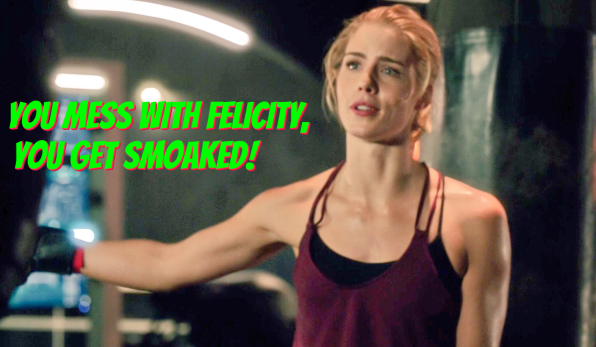 This is a terrible catchphrase. She needs to say it ALL THE TIME.

Now we continue my series of improbable NY Toy Fair wish lists. Just as I’ve split my DCC wishlists into DC TV & DC Icons, I’m also dividing my Marvel Legends wish lists into comic book & movie flavored editions, unlike Hasbro. Its habit of mixing movie & comic book based figures in Marvel Legends series can be frustrating if you’re interested in one variety but not the other. There’s also been the issue of them only making some characters in smaller scales if at all. So there’s actually a bigger pool of villains & supporting heroes to draw from than you’d expect from a mega-franchise that loves licensing. I’m omitting upcoming characters I haven’t seen yet such as Hela & Ayesha, but it’d be wise for Hasbro to make them to coincide with their movies’ releases.

10) Yellowjacket – Technically there already is an ML Yellowjacket. It’s an itty-bitty pack-in for the ML movie Ant-Man with an inaccurate helmet. How about one that won’t immediately get lost between couch cushions this time? “What if Michael Bay’s Bumblebee was a person with half of Dr. Octopus’s tentacles?” could come with a corrected replacement helmet for his foe & tiny sheep.

9) Kurse – Though not as vibrant as his comic counterpart (remember when fantasy films weren’t ashamed of color?), Kurse was a gnarly monster. As a bonus, throw in the mask Algrim the Strong wore to get into prison.

8) Deadpool – Before Disney bought Marvel, Hasbro didn’t have a problem making toys of Fox’s crummily attired movie X-Men. Hasbro has since stopped making any. Of course Deadpool made all the money, so perhaps the unofficial embargo can be rescinded to make the only one with a good costume in the name of taking fans’ funds? It’s a longshot, but this wish list isn’t for sure bets. (I didn’t say it’d be MCU exclusive either.) Movie Wade Wilson needs to loaded with twin katanas, twin pistols, a dagger, & an alternate unmasked head.

7) Odin – Naturally this should be the armored All-Father of the first film with extravagant helmet & Gungir laser-spear. Sleipnir & a throne with Huginn & Munnin perched atop would be a lovely yet unlikely bonuses. Then if Hasbro ever makes Kaecilius & William Stryker, you’ll have all the Hannibal Lecters (except Gaspard Ulliel) in this scale.

6) Red Skull – It feels wrong that there are more Iron Men for Captain America to punch than Nazis. Just because the Marvel Universe version was erroneously produced with a normal nose is no reason not to release a 6″ version of HYDRA’s head. Please include a Space Stone & a Luger that fires bullets derived therefrom.

5) Nebula – Movie Nebula looks exactly like 90’s comic Nebula, so this can cover two bases. She’s going to be in at least two more movies, so Hasbro can’t even use the excuse that she’s no longer relevant.

4) Ronan the Accuser – I’m sill angry Hasbro decided to make an ugly space Iron Man that still haunts clearance aisles in its GOTG line instead of the movie’s antagonist. Hammertime Piemaker is still a better villain than Thanos or Malekith. If he finally gets a toy, I can repaint his armor metallic green like it should’ve been in the first place.

3) The Destroyer – This is one character for whom being able to rotate its joints 180 degrees is accurate. Please include some kind of light-up death ray attachment for this shiny & chrome Asgardian murder machine.

2) Vision – The upgraded form of JARVIS is the only Avenger that doesn’t have an ML action figure yet. (Nobody care about you, Quicksilver that died for Hawkeye without generating any music videos!) Even bootlegers recognize the folly of snubbing this colorful synthezoid.

1) Sif – As a breakout supporting character that does TV guest appearances, we should already have Sif. (Ha! You thought I was describing Peggy Carter!) Don’t skimp on her sword, shield, & double-bladed spear.

Why is Professor X playing his own son in Split before Legion airs?

The latest trailer for Logan revealed it will feature recognizable costumes & Sauron. YAY! But they’re only in the comic books created specifically for this movie. BOO! (There’s speculation that Disney wouldn’t even license existing X-Men comics to Fox so they had to make their own. Or the movie had extra budget it needed to burn through.) I’m mad at Logan for only using the things I want to see in an X-movie as jokes about comic books. Why can’t they even try to get Hugh Jackman into something like this or this? Rogue’s contribution is falling off a cliff because Fox won’t let her do anything cool even in a non-canon comic book. That’s the one bit of movie continuity Fox cares about?

10 thoughts on “What Is Dead May Never Die On TV?”