A Wonder Woman, Squirrel Girl, & The Doctor team-up … is not something that is happening. Sorry! If I had my druthers, it would’ve happened already. Their joint powers & can-do attitudes would need to be pitted against a combined mega-obstacle just to be sporting! Okay, maybe that team-up would be too successful at solving all the multiverse’s problems for any successive fiction to matter.  But now that Spider-Man: Homecoming is out of the way, we can finally resume talking about these lovely ladies!

Speaking of Wonder Woman, the one supporting character I didn’t mention in my my review was Chief because his character didn’t to pop in comparison to the rest. Then I found out that in his un-subtitled introduction to Diana, he introduces himself as Old Man Napi the Blackfoot Demi-God! This completely recontextualizes him. Now he’s vastly more interesting. It’s a much better Easter Egg than retroactively saying some masked kid in Iron Man 2 was Peter Parker.

Here’s a follow-up article on the cinematic Amazons that barely got any screen time. Hopefully they & Napi can get further fleshed out in the 80’s set sequel. Check out Wonder Woman Character Of The Day to get caught up on various obscure characters that could also appear if DC & WB remember they exist.

Milana Vayntrub is Squirrel Girl on the New Warriors TV show! That’s perfect! They’ve cast her just in time for a surprise cameo in Infinity War Part 2 to eat nuts & kick Thanos’s butt! Other characters I don’t care about will also be in the series. Now can she get a Marvel Legends or Marvel Select figure?

The BBC spoiled the identity of the next Doctor Who star prior to Peter Capaldi’s (he has the best eyebrows because he absorbed the eyebrows that Matt Smith would’ve had) exit. Instead of televising an over-long press conference this time, they cavalierly said they’d tell us whenever tennis was over. Your new Doctor will be Jodie Whittaker. I don’t know if she’ll do as good a job as Missy, but I’ll give her a shot. To appease naysayers, Daleks are being redesigned. My main concern is that I’ve not been impressed by new showrunner Chris Chibnall’s previous Doctor Who, Torchwood, or Broadchurch episodes. They should’ve picked Patrick Ness for his surprisingly & consistently great Class. Don’t bollocks this up, Chibnall! Hating the latest showrunner is a proud Whovian tradition!

Marvel Legends toys for November’s Thor: Ragnarok are already beginning to hit stateside because Hasbro has no brakes. I’m not sure if I’ve even seen the Mantis GOTG2 series yet. (The mostly Netflix series without Luke Cage or Iron Fist is out now too. How are collectors that aren’t comics fans reacting to the Man-Thing BAF?) Thankfully Hela didn’t get snubbed as typically happens to MCU villains, although the same can’t be said for Fenris or the visible Balrog model called Surtur. You have to buy a two pack with a Thor variant to get Valkyrie though. Aside from Jane Foster as Thor, the comic book half of the series is a complete let down. Whereas the vibrant colors were a highlight of the trailer, Hasbro picked characters with the drabbest palettes. Young Thor has a hideous head sculpt & a ridiculous painted-on shirt. Their Ares BAF is being rereleased as a single boxed figure because they wouldn’t spring for the minimal new parts needed for Executioner or Titania. It’s a bummer that the more colorful Malekith the Accursed (not the worst MCU villain edition) & Ulik are SDCC set exclusives. (Apparently the TRU exclusive A-Force set is now a SDCC exclusive as well?) I understand blending comic & movie figures when there’s not enough toyetic MCU characters to fill out a whole series like Ant-Man (they could’ve at least given us a non-tiny Yellowjacket), but it just stinks of cost-cuting when there’s so many cinematic Asgardians yet to be made. Where’s Sif, Odin, Destroyer, Heimdall, Freya, & the Warriors Three? 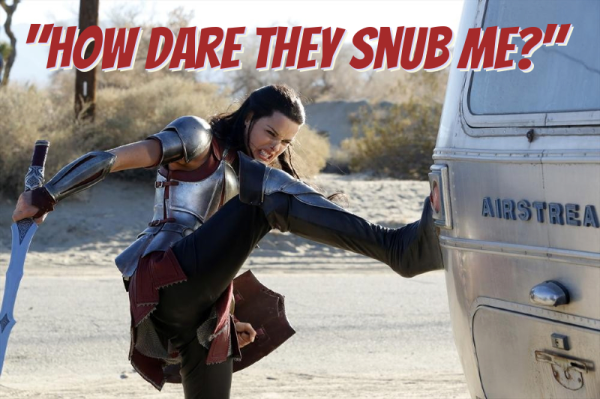 The fourth Black Canary on (Green) Arrow is finally getting a killer costume! (I guess this means she didn’t get exploded to death?) Juliana Harkavy’s new suit reminds me of her New 52 costume, which looks more sensible than fighting crime in regular fishnets & a leather jacket. DC Collectibles had better get an action figure of it in the works pronto! Watch as it it gets confirmed before Speedy’s!

SDCC is happening already? My armchair coverage begins next time! Expect a Wonder Woman, Squirrel Girl, & The Doctor team-up to not be announced!