The Defenders comes out on Friday! Until I get a chance to watch it at a leisurely pace, here’s some random other musings! If you make it to the bottom, I’ll tell you about DuckTales!

My feline overlord had her ferocious fifth birthday! She actually liked her presents this year! I don’t know how to process this. 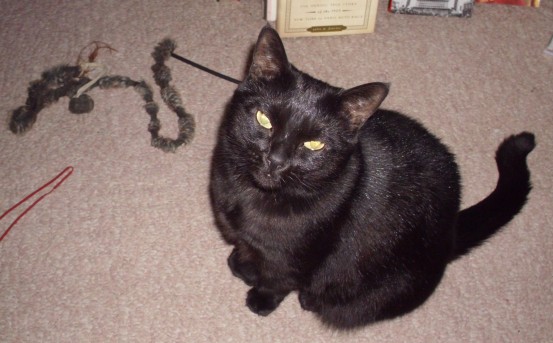 A Purricane of judgmental kitties would be more terrifying than any Sharknado.

Usagi Yojimbo’s three episode arc on TMNT was stupendous! Stan Sakai’s characters look great translated into detailed 3-D! The horseback chase at the end of part one featuring turtles disguised as samurai is as thrilling as TMNT III should’ve been! Tanuki acted like Ewoks! (Even though the censors forced them to wear undies, you can tell they made parachutes with their scrotums.) Neko ninja attack! I wasn’t expecting this from a kids’ show, but they managed to have someone’s skull-soul float out of them when slain! That’s my favorite part of the Usagi Yojimbo comics! Now what do we have to do to get a Usagi Yojimbo animated series greenlit? While we’re waiting on that, you can  Kickstart this TMNT Action Figure Encyclopedia!

War For The Planet Of The Apes is more like The Great Ape-scpae! I liked this movie because it had apes in it! It was depressing, but maybe not quite as much as the time I did a Dawn Of The Planet Of The Apes & How To Train Your Dragon 2 doubleheader. Unlike Logan, it actually featured St. Andrew style crucifixions!

I suspected Luke Cage’s Diamondback would be combined with Bushmaster, but they’ve cast Bushmaster for season 2. (Sadly not the snake cyborg of the Serpent Society. It always amazes me that becoming a snake-themed supervillain is a viable career option with benefits in Marvel.) More importantly, Nightshade will appear! She’s a self-made science polymath prodigy similar to Agents of SHIELD’s Raina. She could be a great foil for Claire, make laser-sunglasses for Shades, & mutate Mister Fish! I will always fondly remember Nightshade for creating Cap-Wolf! Sadly I doubt she’ll be making any lycanthropes because Netflix doesn’t grasp that relatable superheroes don’t have to be grounded. Once undead ninja are on the table, insisting on gritty realism becomes absurd. Cut down the episode count so the budget can be better spent on Luke vs. Nightshade’s werewolf army!

Remember when I said I went to a secret advance movie screening & nobody bothered guessing what it could be? Now that it’s finally hit cinemas, the NDA informs me that I can tell you it was Ingrid Goes West. This was an enjoyable dark comedy about woman trying to overcome mental illness by emulating an Instagram star. As always, Aubrey Plaza is captivating as Ingrid Thorburn. I was pleasantly surprised by O’Shea Jackson Jr. as aspiring screenwriter Dan Pinto. He’s a Bat-fanatic, but not one of the pretentious Nolan fanboys. The fact that he’s obsessed with Batman Forever makes him much more endearing. (I discovered I have the power to instantly identify Batman Forever typography.) So this movie is tangentially nerdy.

I finally saw “What if Ste(ph/v)ens King & Spielberg had a baby?” a.k.a. Stranger Things. I would’ve liked it even more had the Interwuzzle not insisted on spoiling so much. #JustIceForBarb! Why can’t Barb just get some ice? For more Millie Bobby Brown goodness, check out Intruders co-starring politicians Harry Saxon & Theo  Galavan. Before all the letters appear together, it briefly spells “RANGING.” Is that a D&D in-joke? As gnarly as The Upside-Down was, showing its scenes rightside-up felt wrong.

Speaking of Stranger Things, its David Harbour (I forgot he was a canon character in Suicide Squad) is set to star in Neil Marshall’s R-rated Hellboy: Rise Of The Blood Queen reboot along with Ian McShane & Milla Jovovich. I am very conflicted about this! I like all those people’s work, but I really wanted to see the conclusion to Guillermo Del Toro’s Hellboy trilogy first, especially since Ron Perlman & Doug Jones were still eager to do it. (At least NECA will be making GDT toys. How did I not notice Pan had four nipples?) I get the feeling Lionsgate just wants to cash in on the R-rated superhero movie craze, which should’ve started with Blade.

I didn’t think I needed another new show to fill the Orphan Black-sized hole in my heart (I am shocked P. T. Westmoreland is really from Potatohoe!), but the pilot to the new DuckTales reboot is pretty great! It was so good that it was the only thing Disney XD aired for 24 hours. Wait, why isn’t the next episode airing until the end of September? Between this & the Good Omens adaptation, David Tennant continues his quest to be part of every fandom. Launchpad McQuack is still a better pilot than either Steve. (Did you know Captain America once hired Man-Wolf as his personal pilot?) I’m lukewarm on the art style, but I do love comedies about monsters & pulp adventures! Cape Suzette was referenced along with skypirates on a newspaper clipping, so perhaps there’s a TaleSpin crossover on the horizon? Even better: Darkwing Duck will be in DuckTales! I’m not a fan of his new belt, but I dig the notion of Gosalyn befriending the revamped Webbigail (armed with Mabel Pines’s grappling hook gun, because this is a show for grieving Gravity Falls fans too). Now can Joe Books resume publishing Darkwing Duck?

Next time: Will I defend or assail Netflix’s The Defenders?