You ever go to a barbecue joint you haven’t been to in a while & decide you might as well splurge on a full rack of baby back  ribs? Then when they bring out your food, it looks like almost too much food? But then you start on the first rib & it’s even more delicious than you remembered. So you quickly strip the flesh from a second rib. Then a haze sweeps over you. Once it passes you see your glass of sangria is empty, your plate of ribs contains naught but a heap of bones, the other patrons have expired with large chunks missing, & your hands are covered in red goo of assorted viscosity. Then you declare that it was really yummy! Luckily the kitchen staff appears intact so you may return. That’s what Thor Ragnarok is like!

The Wages of Cinema invited me back to collaboreview it with them. I agreed since they had nice things to say about me in their retrospective podcast of favorite episodes. Verily doth SPOILERS roam free onward!

Director Taika Waititi should be praised for making  Thor Ragnarok an unabashedly colorful comedy! Not only is it the best Thor movie (the first is still very good), it’s also one of the best MCU movies! It’s another 1980’s throwback in the best way possible. Not only was Odin in a nursing home like The Long Dark Tea Time Of The Soul, but the humor is wryly irreverent throughout like a Douglas Adams story. The vivid grandeur of the production evokes Flash Gordon. Thor himself is a craftier Jack Burton from Big Trouble In Little China beset by misfortune. The action plays out like stages of a vintage video game.  This would make a great double header with GOTG 2! (Way to ruin the cosmic hat-trick, Spider-Menace! Its reference to Thor’s belt is the kind of thing that drives me nuts because it’s a real mythological item but it’s never been used in the MCU before. It’s the Schrodinger’s cat of continuity nods.) The movie makes most of the jokes I was going to! Please continue making Thor movies like this!

We’re never getting a perfect cinematic Thor costume, are we?

Thor’s battle with Hulk is less lopsided than Batman vs. Superman or Iron Man vs. Captain America. Thor even tries to abort the fight! As Hulk is one of my least favorite characters, it was glorious to see Thor smack him across an area with a giant hammer. Therefore it’s the best of the gratuitous cinematic superhero brawls!

Loki’s & Thor’s relationship continues to evolves as the backbone of the Thor films. It’s improved now that Thor is in on the joke. Chris Hemsworth’s comedic chops are as strong as Tom Hiddlestons’s. Asgardians thrill to plays of Loki’s demise because they’re audience surrogates. This movie is definitely better than The Dark World by virtue of having Loki be horned for one scene! The horns get their own statue too! His Sakaar costume would look much better in green though.

This movie is packed with new characters, but fortunately they ooze personality & each have delightful introductions. (Could that be a record?) Jeff Goldlum plays Jeff Goldblum The Grandmaster, armed with a melt-stick to compensate for his natural cerulean skin being concealed. The scene alluding to Brunhilde the Valkyrie’s bisexuality was cut, but her proud alcoholism remains. Her backstory is thankfully less convoluted than the comics. Taika Waititi is much more memorable sidekick as Korg (the series’ second Kronan warrior) than Green Lantern’s Tom Kalmaku. Skurge The Executioner doesn’t have his traditional mistress or swing his signature magic axe, but he does get a “he stood alone at Gjallerbru” moment. (Amora the Enchantress’s sister, Lorelei, appeared on a terrible episode of Agents of SHIELD, presumably because the movies called dibs on Enchantress that they didn’t follow through on.) Unlike the unresolved Avengers: Earth’s Mightiest Heroes, Surtur is a sentient Chekov’s gun voiced by Clancy Brown.

Thor is jealous he can’t keep a helmet longer than one scene.

Cate Blanchett as Hela is marvelous! Sadly she isn’t in it as much as I expected. She gets more personalty & things to do than most MCU villains, but I still wanted more of her. With the ability to generate unlimited bladed weapons, Hela doesn’t need any Infinity Stones to bring Asgard to its knees! She seemingly dies when Surtur destroys Asagard, but there’s the possibility she could appear in Infinity War as Thanos’s unrequited love since his obsession with Death is his only interesting trait. (Petition to replace Thanos with Hela or Surtur as the MCU’s big bad!) Hela is supposed to be Loki’s daughter not Odin’s! (The MCU movies aren’t direct adaptations of the Marvel Comics which took huge liberties with Wagner’s Ring Cycle which has discrepancies to the original Norse mythology because culture is a prolonged game of telephone.) Fenris appears but not their brother, The Midgard Serpent. Her dismissing the Infinity Gauntlet in Odin’s vault as fake may be the best continuity error no-prize.

Although it’s consistently funny, it also has dramatic consequences. Beloved Mjolnir is destroyed, which leads Thor to realize he’s not God of Hammers. Channeling lightning himself seems like it should be a power boost, but wielding Mjolnir looks more impressive. Odin abruptly dies with scant warning for how this unleashes Hela from her (Niflheim?) imprisonment. Hela cuts out Thor’s eye, which is a less awesome way to get an eyepatch than selling your eye to Mimir’s well for wisdom while crucified upon Yggdrasil. In a callback to Thor saving Jotunheim by destroying the Bifrost, the Asgardians are saved by letting Ragnarok happen. Although it warmed by fatalistic heart, shouldn’t Asgard’s destruction cause a chain reaction that wipes out the remaining eight realms?

Sif was completely absent because Marvel Studios didn’t give Jaimie Alexander enough notice to avoid a scheduling conflict with Blinsdpot. There is zero explanation for this in the film. Valkyrie wasn’t a last minute replacement for this fan favorite, so it’s puzzling Sif was treated as an afterthought. This leads to a Smurfette issue where each Thor film is only allowed one named heroic warrior woman. (They can have multiple villainous warrior women as shown by Topaz, who’s probably not supposed to be the like-named witch.) Meanwhile Dr. Strange pops up for the extended stinger to Doctor Strange, which is fun but a bit superfluous.

You can tell this is a mega-franchise blockbuster made with lots of nerdy love. Sadly there’s no flashback to the aside about Frog Thor. Beta Ray Bill’s head is on The Grandmaster’s tower along with others’! Jack Kirby’s aesthetic looks even better in live action!  Waititi even blended in some Maori in-jokes. It makes The Dark World seem like an even worse rough draft for GOTG!

Most of the flaws with this movie can be laid at the feet of previous installments. While the prior films tried to plead Clarke’s Law to ground the Asgardians as mere aliens, this one drops the pretense that they aren’t magical Deities. As much as I like Natalie Portman, Kat Dennings, & Stellan Skarsgård, the Thor trilogy’s first two movies spent way too much time on regular Earthlings. (It’s especially infuriating they spent so much time building up to Thor & Jane Foster’s romance but then immediately dropped it once they became an item in a post credits scene. That’s not how you resolve romantic tension! We don’t know if Thor or SHIELD wrangled that lost Jotunheim beastie either.) Moviegoers barely got to know The Warriors Three, so ignominiously killing them off so fast is not as tragic as it could be.  The runtime is stuffed to the gills with about three movies’ worth of plot. Lots of new characters & lore are introduced rapidly (yet surprisingly effectively) because they weren’t established earlier. Skurge’s redemption arc would’ve been more meaningful had he debuted as a villain in the first sequel. Why doesn’t Thor try vaporizing Hela with Gungir?

The worst part of Thor Ragnarok is now my Marvel Legends Hela has to be customized for screen accuracy, although the toy variation of her breastplate was worn during filming before CGI redesigns were overlaid. I’ve already painted her eyes (the wrong color). Now I’m considering repainting her head without the facepaint meant to evoke her comic book mask, though it does look spiffy. I probably should punch up her metallic greens too. I’m still disappointed in Hasbro’s movie character selection. It made Heimdall’s sword in the Thor & Valkyrie two-pack but no Heimdall (preferably in his snazzy armor of earlier installments)? The Sakaarian guards have such nifty Kirby-esque costumes that I wouldn’t mind getting toys of some. Wither comic & movie varieties of Skurge? A Miek & Korg (he’d be a great base for Rockslide customs) two-pack would aces.

So this is the part where a conclusion goes. This is a movie you should see in cinema if you hadn’t decided that already. Forsooth Thor Ragnarok rocks! NPR stole my headline pun after I’d called dibs! (Maybe that’s good for SEO?) As the prophecy foretold, it was Hela good!

I researched hyena dentition for my Jack-o-lantern this year. This is emphatically not a Direwolf! (Down with House Stark & its northern pretenders!) My kitty tried to pull me down the stairs twice in a row since illuminating it, so I take it she doesn’t like this year’s fire vegetable. 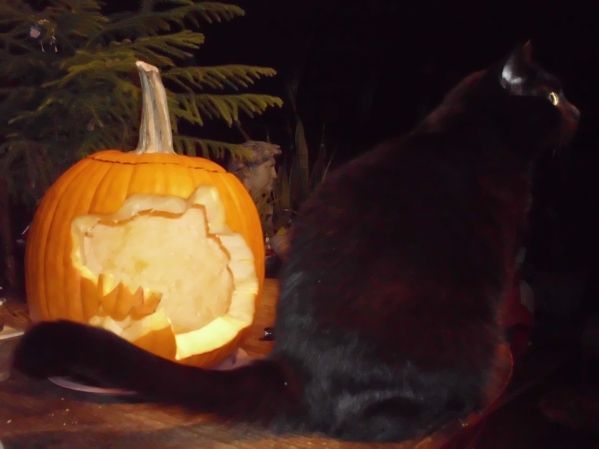 Subscribe & stalk me on the social media (click the cog for links) to be the first on your block to read my next blog!