Ice! Mr. Freeze! Captain Cold! Killer Frost! Icicle! Ice Maiden! Blue Snowman! Minister Blizzard! Together they are The Just Ice League! And none of them appear in the Justice League movie!

I’m pleased to say that Justice League doesn’t suck! That doesn’t necessarily mean it’s spectacular. Do not go in expecting a Marvel Studios film. It’s a good movie but not a great movie. Much of what holds it back is having to clean up after Batman v. Superman: Dawn Of Justice. Fortunately the Justice League itself is a charismatic team instead of the maudlin worst case scenario we’d feared. The action is kinetic, the jokes are funny, & the story is coherent. So says The Wages of Cinema!

Fans of Eureka please send them feedback! Then read onward for THE SPOILERS OF JUSTICE! (They’re like the Hammers of Justice, except you can’t make bookshelves with ’em.)

While Justice League isn’t as wondrous as Wonder Woman, Gal Gadot is still as winning. After seeing her single-handedly slay Ares the God of War, it beggars belief that Steppenwolf would pose any threat to her. The Lasso of Truth doesn’t solve any plot problems, but it does enable some quality comedy. She easily defeats the most generic inoffensive terrorists possible, but it’s irritating that she’s not used to her full potential. Thankfully the threatened sexual tension between her & Batman is minimal because it’s not her responsibility to prop him up. 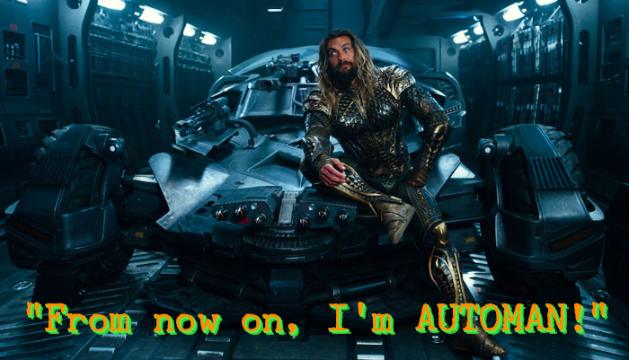 Jason Momoa as Aquaman was one of the most puzzling casting choices when it was announced, but he pulls off the role swimmingly. The movie wisely uses just the right amount of compensation for the misconception that Aquaman is lame. We don’t observe him talking to fish, but he skewers Parademons with a pentadent very well! Alas, he never shouts “OUTRAGEOUS!” His costume looks cool despite not having enough bronze scales  & lacking calf fins. I look forward to seeing more of him, Mera, & Atlantis in his solo movie.

The Flash is the perfect character for Zack Snyder to indulge in slow motion action without disrupting the flow. Even with steep competition from Grant Gustin, Ezra Miller is wonderful as a comic relief speedster. When Batman & Wonder Woman argue, he says what the audience is thinking: “If she kills you, we’ll all cover for her.” This Barry Allen is a klutz, so he has an excuse for not instantly saving the day with superspeed. I hated the Flash’s costume in BVS:DOJ. They’ve since tweaked it to be acceptable, although it’s not perfect like his fourth season TV costume.

Ray Fisher’s Cyborg has the best character arc. He starts off as mopey as you’d realistically expect of someone whose body was recently transformed into alien machinery. (He claims STAR Labs’ Mother Box didn’t activate until the night Superman died, but Luthor’s video of his creation says otherwise.) Unless you’re as big a fan of The Super Powers Team: Galactic Guardians as Geoff Johns, you’re probably wondering why he’s on the team instead of Martian Manhunter or a Green Lantern. Linking his origin to a Mother Box gives a plausible way of combating the MacGuffin as one of the movie’s two literal Deus ex machinas. By the end he’s starting to open up & be proud of his abilities. He upgrades his body with a logo & says his Teen Titans toon catch phrase!

As its clearest metacommentary, Batman spends much of the movie trying to make amends for his monumental cock-up in BVS:DOJ. Despite his short ears, Ben Affleck remains a great Batman. (Now can we get please get a respite from “Affleck will leave DCEU” articles? Without anything concrete behind them, they’re just mean-spirited puff pieces.) He wields both terrestrial & alien guns, so that’ll keep the “Batman must never use firearms” contingent pissed off. He really needs to be more careful with his secret identity around Icelanders.

I hope you’re sitting down because I’m about to spill the beans on the film’s worst kept secret: Superman doesn’t stay dead! I’m not sure if I should commend the marketing for keeping that under its hat. Henry Cavill’s Superman is more charming in the first two minutes of this ensemble piece than the entirety of the two prior movies he starred in! The DC movieverse wouldn’t be in such dire straits in the first place if Snyder had let him smile. I am very in favor of this course correction! Sadly he is is sans ‘stache. Is this the first of Snyder films where he uses freeze breath? I doubt, however, that it’s possible to lift & carry an entire apartment building with one hand without disrupting its structural integrity. How are they going to explain how Clark Kent stopped being dead after a year? 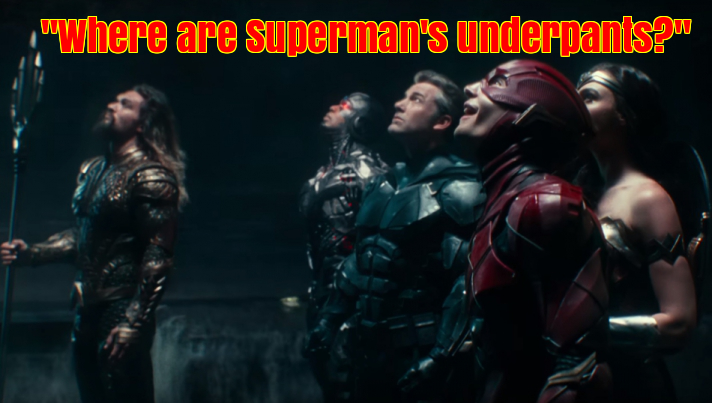 If anything, this movie proves how superfluous BVS:DOJ is. It was not necessary to set up Justice League at all. The team spends a chunk of time undoing its climax, the death of Superman. That screentime could’ve been used to introduce Wonder Woman (in a hypothetical world where this was the next movie after Man Of Steel) or expand on the Fourth World mythology (in a world where she still got her movie first). It’s shorter & better paced to boot. Much like Guardians of The Galaxy, the Leaguers are well defined & acted so that they don’t require origin movies first for viewers to get them. So if you still haven’t seen BVS:DOJ, continue skipping it & dive straight into Justice League. You may enjoy it even more that way, although you won’t be able to see how much Warner Brothers learned from its mistakes.

I was really happy the Justice League assembled without coming to fisticuffs unlike the Avengers. Sadly this streak ended once Superman was resurrected much like the creation of Vision in Avengers: Age of Ultron. As if he’s just risen from a Lazarus Pit, Superman arbitrarily goes berserk on the superheroes. It’s absurd that he’s in any state to defeat Wonder Woman. Batman forgot their safe-word is Martha! Why didn’t he say that name? If Superman’s suddenly the Hulk, Lois Lane is deployed to calm him like his Betty Ross. (The MCU outsourced her job to Black Widow.) At least this gratuitous slugfest is filmed in daylight.

Ciarán Hinds as Steppenwolf may be the biggest waste of an actor on a villain since Christopher Eccelston as Malekith, the difference being that nobody was a fan of Steppenwolf in the comics. He was picked because of Snyder’s axe fetish & they didn’t want to rush to his nephew, Darkseid. They still could’ve given him a personality & armor more distinct from Ares’s. His horned helm & command of cannon fodder aliens draw unfavorable parallels to Loki in The Avengers. Steppenwolf & his horde would feel fresher if Chitauri weren’t used to seed Thanos the knockoff Darkseid.  Strangely his axe’s ability to transform his slain foes into Parademons isn’t milked as a plot point. While I prefer the red Parademons of Super Powers, the classic green Parademons upstage Steppenwolf here. I was expecting them to foreshadow him better, but Darkseid only gets namedropped a single time. If they don’t get around to an epic Fourth World sequel, Starro the Star-Conqueror or Despero would’ve been better foes.

Lex Luthor invited Deathstroke for a slumber party to watch A League of Their Own! Jesse Eisenberg isn’t in it long, but fortunately he’s not obnoxiously manic this time. He’s dressed like Gene Hackman, has a yacht like Kevin Spacey, & is flanked by female bodyguards like Clancy Brown. So maybe he won’t be an awful Lex going forward? (Can Suicide Squad 2: Squad Harder or whichever Joker movie goes into production first begin after Harley Quinn & the Joker get their tattoos lasered off?) I’m very excited for the Justice League to face off against the Legion of Doom/Injustice Gang/Secret Society of Supervillains in the sequel instead of each other!

The exposition is very clunky at the start. Batman uses a random thief’s fear as bait for a Parademon who’s supposed to be looking for Mother Boxes. Its ichor splatters into a pattern of the three boxes. (They’re not just New Gods’ iPhones here.) Then the crook calmly pontificates that aliens are invading now that the world has lost hope in the wake of Superman’s death. Diana has to explain what the Lasso of Truth does to her enemies. Fortunately the second half has enough momentum where this is less noticeable.

Unlike Snyder’s previous outing, most of the action is well lit. All the Leaguers get their moments. There is much teamwork & saving of civilians. I was especially a fan of the Amazons’s relay race to keep the Mother Box from Steppenwolf featuring the toyetic Penthiselea & Venelia. (It’s disappointing how they cast Amazons of a diverse range of body types, ehtnicities, & backgrounds but we hardly meet any of them. If they want to upgrade any to characters with speaking roles, Brooke Ence could be a fantastic Big Barda.) The LOTR-esque flashback of the Amazons, Olympians, Atlanteans, humans, & a Green Lantern uniting to kick his ass was keen too.

Also unlike his last DC movie, this one feels less embarrassed by comic books. It doesn’t twist itself in convoluted knots trying to justify its outlandishness that only results in pretentious incompetence. It’s possible this change in tactics may be the result of enlisting Joss Whedon to co-write & co-direct after Snyder had to step aside in the wake of personal tragedy. I don’t mind being able to see both their fingerprints since it resulted in upbeat escapism.

WB finally did the Justice League justice on the silver screen! Of course now that their shared universe is on track, they’re wavering on whether future films will be interconnected. (Zachary Levi will star in Shazam. Marvel’s Captain Marvel is scheduled for a month before his April premiere, so expect plenty of confusing nerd talk in spring 2019.) With the Flash’s film adapting Flashpoint, it may retcon this movie out of existence. So savor this victory while it lasts. Hopefully they’ll use this as a springboard for legitimutantly great Justice League sequels!

Come back after Thanksgiving for me to give you the skinny on the latest team up of televisual DC superheroes, “Crisis on Earth X!”

22 thoughts on “Justice League Is Served!”