So many scripted shows got axed like timber this TV Upfronts season! Pretty soon I’ll have to resume blogging about books! I’m blaming The Shadow King. Why? Because I made a custom action figure of him, & I don’t feel like either is meaty enough for separate blogs.

WHY WOULD YOU CANCEL THE EXPANSE, SYFY? WHAT IS YOUR DAMAGE? DONKEY BALLS! It’s the best scifi series on TV! Apparently it was primarily due to some bizarro licensing deal that prevented SYFY from actually profiting from airing it, but then why would anyone agree to that in the first place? NBC swooped in to save Brooklyn-99 from the gullet of The Cancel Bear, so who’s going to save The Expanse?

If Designated Survivor is done, will its Italia Ricci return as Silver Banshee for Supergirl season 4? She was built up to be Kara’s arch-nemesis, only to be embarrassingly defeated & never heard from again. Or is she another actress that refuses to work in Vancouver?

Meanwhile in good TV news: Inhumans is officially cancelled & there was much rejoicing! Although it seems to be tying up all its danglers aside from Griffin & Hellcow (the only beings capable of vanquishing Graviton), Agents of SHIELD is returning for surprising season six in 2019! Zima is also making a comeback so we can all be Deke!

After much anxiety, Gotham got renewed for a final season! Just like SHIELD, its latest episode count will be abbreviated to thirteen. That’s still much better than being abruptly cancelled on a cliffhanger! Better to go out on top than overstay your welcome like Smallville & Arrow. I have an extensive list of unreasonable demands that must be included! Sadly DST’s action figure range appears prematurely dead. Now why are there no fan videos of Nygmobblepot set to “Genghis Khan” or Firefly for “Play With Fire?”

I also learned WB is embargoing the show from calling any of Cameron Monaghan’s characters The Joker or having green hair even though he deserves it more than that wanker in Suicide Squad. Even if his only line was “USE THE TONGS, CARL!,” he’d still be worthier. None of their embargoes make lick of sense! Now I’m worried they won’t be allowed to use the names Catwoman or Batman either. Although what’s the reason they won’t call Jervis Tetch the Mad Hatter when it’s a public domain name, he’s not slated for any DC movies, & he wears 10/6 size hats?

At least rebooted Ducktales has finally returned with new episodes! The cold open to Gizmoduck’s debut was so damn great!

Is Detective Chimp & The Case of the Missing Mustache in Teen Titans Go! To the Movies a reference to “The Mystery of the Missing Moustaches?” Sadly for my ego, the S-shield hints that it’s a nod to Henry Cavill’s glorious lip warmer being digitally removed for Justice League. 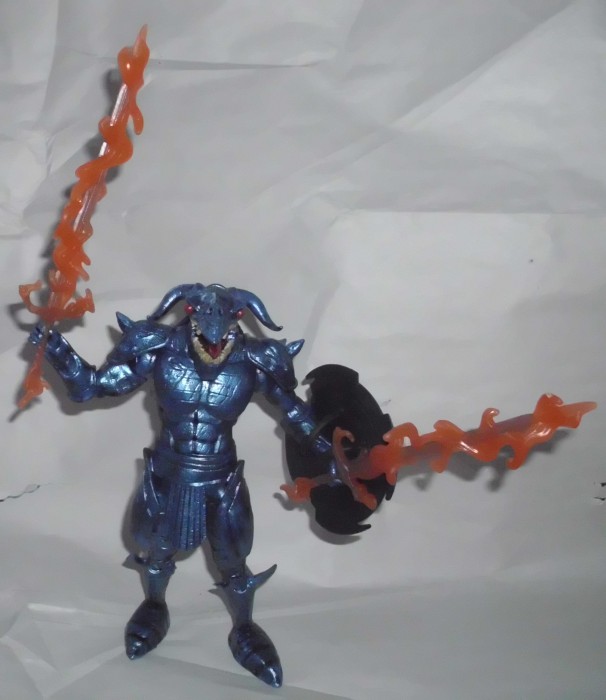 I thought Mattel’s Ares movie BAF looked familiar, but I couldn’t place it until I put a flaming sword in his hand. He’s the ideal base for a Shadow King! Did it have a fleece draped over his shoulder (that I pried off) because someone conflated Ares with Aires? There is something primally satisfying about gluing googly eyes into the sockets of Ares’s helm. I surgically recofigured it into Shadow King’s face. For not having a glorious David Thewlis moustache, I gouged out the stupid shadowy visage within the former helmet. His tongue was carved from a piece of resin & inserted through his new face aperture. The spikes were leftovers from some resin models. Klompen-size knight shoes were sculpted over Ares’s tiny bare feet. The original paint job was nice by Mattel standards, but I obscured it with coats of lovely metallic sapphire. (Ideally I would’ve transmuted the whole thing into trasnlucent blue plastic.) 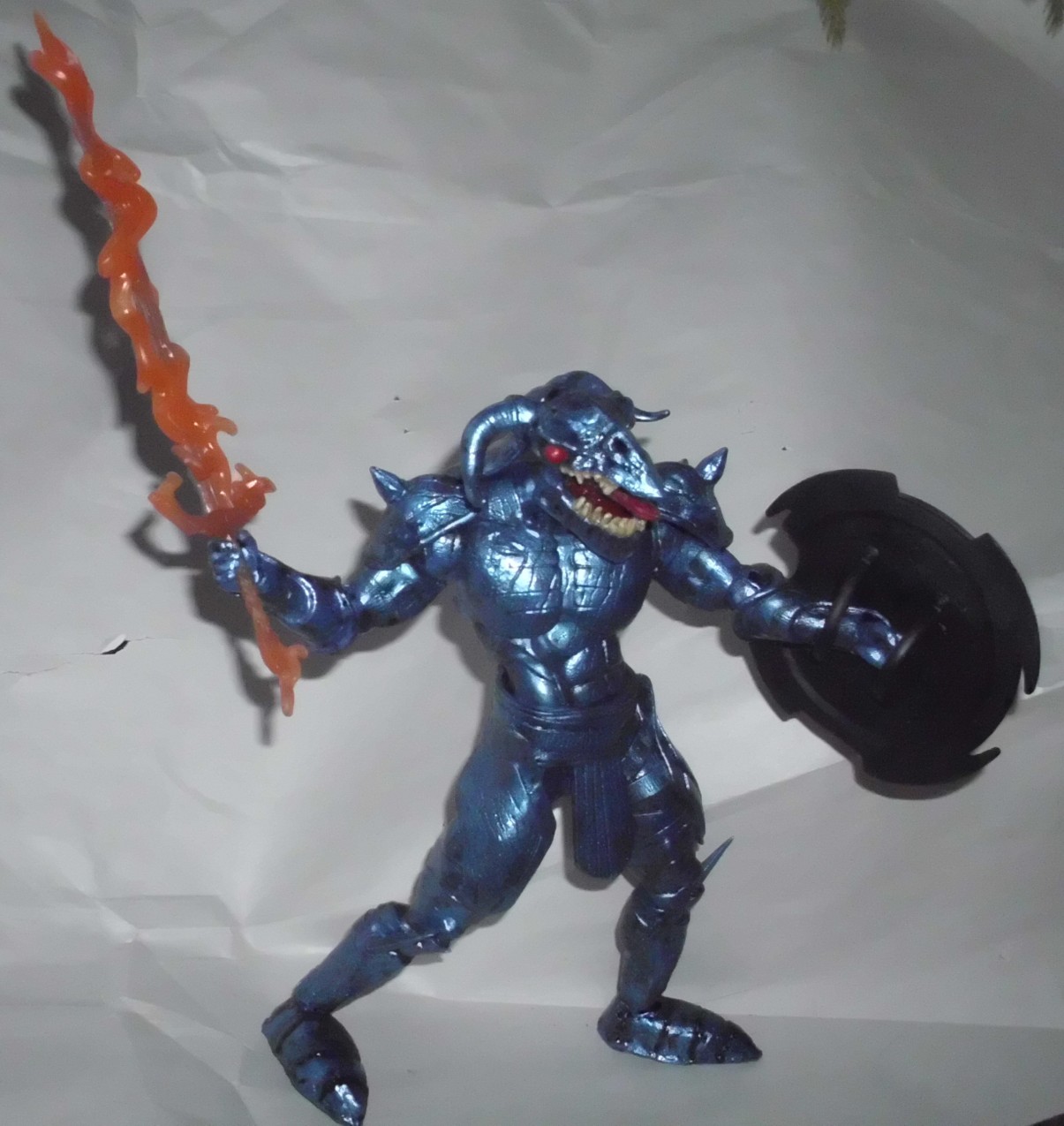 It’s tricksy to get consistent reference images for this look despite it being Shadow King’s best, so I gave myself additional creative license. I will always appreciate the X-Men cartoon’s insistence upon detail over streamlining things for fluidity. They could’ve easily made Shadow King just a blue Hulk with claws & a lizard face that he’s more often depicted as, but they went the extra mile to deck him out in his finest mental construct armor! Clearly annonymous animators have better work ethics than most comic book artists. He’s got a Chris Achilleos vibe, which made me associate this design with Sauron (not his fellow X-foe) afore Peter Jackson got to him. Fiery swords always make me think of Balrogs too. This custom kind of looks like a Terror Dog.

I couldn’t find a small enough Professor X for him to fight. 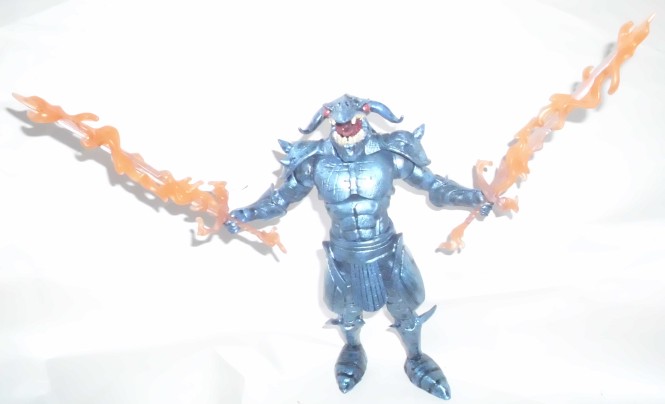 For a someone calling himself The Shadow King, he sure is shiny.

Now that Legion has gratuitous time travel, it’s a real X-Men story! Navid Negahban has been killing it as the regal Amahl Farouk! While I enjoy the chalkboard & dance battles of Legion, I do hope to eventually see him in psychic monster-gladiator armor. For a show that delights in the bizarre, I wonder why it stops short of giving David his signature Troll doll hair? I wonder if that Shi’ar namedrop is going to pay off or whether it was supposed to synergize with the delayed Dark Phoenix film? Legion is getting an extra episode. That usually implies that it’s cancelled but with the luxury of tying up loose ends. Did I just unite the blog’s two disparate topics?

Look For my Deadpool 2 collaboreview coming up next! This week also sees the season finales of a bunch of TV shows I cover, so they may get their own piece shortly thereafter. Unless you’d prefer the Deadpool review to be extra-long?