This Luke Cage season two review is somewhat late because it’s not a series conducive to binging in one day. It should be more punctual than my season one review. Does that make it a lukewarm take? Much like the headline, this contains spoilers. 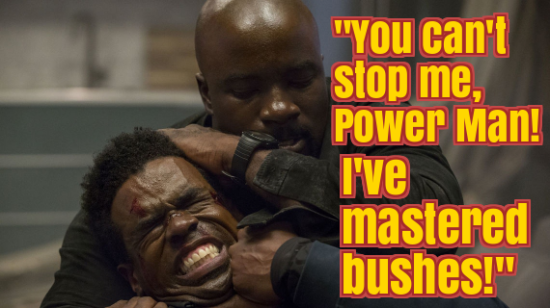 Why does he only fight union scabs instead of the Serpent Society proper?

This contains more action & color than Jessica Jones season 2. (Unlike her TV show, the first two compilations of Alias are nothing but anticlimaxes. She explains how the most important first step in being a private eye is to make sure the client is legit in the opening arc then explicitly neglects this? Way to undermine your new character right off the bat, Bendis!) The soundtrack remains superb, although multiple musical performances halt the narrative. Harlem’s Paradise has musical acts thematically on point to each episode because it employs a precognitive talent booker. (If this were set in the Netherlands rather than New Amsterdam, Haarlem’s Pergola would be a front operated by the Steens.)

Like other Marvel Netflix series apart from The Defenders, this season is too long. Normally I’d recommend cutting parts that were bad or didn’t go anywhere, but nothing was outright awful. The flashbacks filmed in Jamaica were a breath of fresh air, although they didn’t impart much new information that what we weren’t told of Bushmaster’s origin.

The debut episode makes a point of showing that Luke is more invulnerable than ever, even to exploding Judas bullets. The show doesn’t replace them with a new weakness though, so Luke never really feels imperiled. Even being paralyzed & almost drowned by Bushmaster comes off as a minor inconvenience. The main conflict is there being too many goons with ineffective weapons for him to clobber all at once. Their ricochets put everyone else at risk.

Black Mariah sells off her illegal gunrunning business in an attempt to leave the crimester life behind forever. This is a compelling mix of hypocrisy & pragmatism. Her plan backfires since she inadvertently sells to her sworn enemy, Bushmaster. Then she goes all in on being a violent gangster. So much for redeeming her family legacy by helping Harlem! Alfre Woodard gives her all to this performance despite being too slim for the role.

Similar to Supergirl’s Reign, Bushmaster makes a grand entrance yet doesn’t fulfill his potential at the climax. Once he’s arrested, his brilliant escape plan is to blow himself up & hope to find more special herbs to heal himself. Not making him an exact doppelganger of Luke like the comics (his brother is the less obscure Bushmaster that looks like a snake) was a wise move, although how he gets empowered is baffling. He just inhales an herbal concoction including nightshade, although they’re emphatic it’s not magic. After all the centuries it’s been used by herbalists, you’d think somebody would’ve figured out nightshade makes you bullet resistant before. The main ingredient being Wakanda’s Heart-Shaped Herb would’ve been much more plausible. Explaining that it’s only a Jamaican nightshade interacting with his mystery vaccine don’t help.

Iron Fist’s “Sweet Christmas!” hoodie is a step up from the regular clothes they previously dressed him in, including the halfassed tracksuit from the end of The Defenders. The Iron Fist & Cage patty cake shockwave was excellent, as was Luke throwing Danny like a fastball special. Why did they (as well as Misty & Colleen) only team up for one episode though? They didn’t accomplish much. I want more Heroes for Hire & Daughters of the Dragon!

Whereas Marvel One-Shot: All Hail The King treated “prison gay” as a punchline, this actually portrays it respectfully. Comanche is heartbroken that Shades won’t admit his bisexuality. Shades shoots him for being a snitch even though Comanche’s deal was going to cover him too. Ironically Shades  snitches on his current lover, Black Mariah, for violating the crime code. With both his loves dead, now who are we supposed to ship Shades with? Can’t we ever get a villain power couple that doesn’t go down in flames?

Misty Knight remains my favorite character. The series deals with ableism well. Her cybernetic arms looks nifty even if it’s not gilded. Despite Luke’s fourth wall break, he should be her sidekick.

Money woes push Luke towards being a Hero For Hire without fully committing to it. (The subplot about Luke losing the lease on Pop’s Barber Shop drags on until DW can suddenly afford it?) Only criminals like #1 fan Piranha can afford to pay him, leading to some fun interactions. Of course they don’t pay up due to death or deceit. Sadly this does not not lead Cage to becoming a less stiff mercenary like he’s generally known for in the comics. I understand not starting fugitive Cage as a Hero For Hire, but it’s a tease to not actually have him become one. It’s kind of like adapting Bluebeard without giving him more dead wives than a Christopher Nolan movie marathon.

After Polaris & Legion, Luke is the third Marvel TV lead to do a heel turn. I understand the threat of a power vacuum in Harlem, but Luke deciding to fill it himself felt off given how squarely upstanding MCU Luke is. It seems like there should’ve at least been a clear Hero For Hire phase in-between. Strong-arming gangsters out of Harlem is one thing, but personally overseeing local crime is another. While police can never completely eradicate crime, Luke’s lateral move is still destined to fail. Did he miss the road to Hell paved with good intentions that was Black Mariah’s arc? Either he goes too far & is removed by the authorities, or he doesn’t go far enough & is replaced by someone who will like Wilson Fisk. Even if he survives this arc, can he bounce back from kingpin to superhero? Will he get a free pass with a doctor’s note attributing his morality shift to an untreated concussion?

The treatment of Luke as a local celebrity was great. Every Jamaican being mad at Luke because a reporter said he was faster than Usain Bolt is an amazing running joke. He should’ve cameoed in the finale for a charity footrace to settle the matter once & for all. Apparently the Jaimaican accents are terribly inauthentic, but bad accents are still more aurally intriguing than nobody attempting accents.

The late Reg E. Cathey of Tank Girl & The Mask fame is great casting as Luke’s estranged Titanic-fixated father since both he & Mike Colter have fantastic voices. Unfortunately he, Claire, & Bobby Fish abruptly vanish from the story. I guess they needed them out of the way otherwise they’d convince him he’s not cut out for being a mobster.

It turns out avuncular Bobby Fish isn’t the MCU’s Mr. Fish. Mister Fish finally shows up & he ain’t a fish mutant? How am I supposed to not laugh at him now? It’d be like having Arseface but not giving him a face like an arse! Misty would be even more badass if she single-handedly beat up a gill-man!

The original Luke Cage: Power Man comics were mostly schlocky Blaxploitation, but Cheo Hodari Coker elevated the characterization so everyone feels well-rounded. I was legitimutantly sad when the two most endearing crimesters, Piranha & Comanche, got murdered within the same episode. Unfortunately he didn’t update the villains’ gimmicks as well. They’re just regular criminals. There’s no excuse to keep his foes so unforgivably boring when the rest of the MCU is so wild. Even its Netflix corner acknowledges that superscience & magic exist. You don’t need to sacrifice supervillainy for relatability! With so many normal crimes shows available, this really needs over the top villains to stand out. (Diamondback doesn’t count because he annoys me.) The villains lack the over the top flair needed to make fighting a bulletproof man seem less suicidal. Much like last season’s Cottonmouth, Piranha Jones doesn’t have fangs. Comanche’s not a nefarious Hawkeye. Shades still lacks imitation Cyclops laser-sunglasses. Bushmaster’s enhanced physiology is inferior to Cage’s. Only Cockroach Hamilton (ironically Dorian & Simone Missick are a real life couple) gets his comic book weapon, a multi-barrel shotgun named Josh. (Colter on Colbert: Whither Steeplejack?)

The trailer didn’t have any werewolves, & I certainly didn’t expect they’d throw some in as a surprise. The lack of lycanthropes remains disappointing. They specifically picked Tilda Johnson a.k.a. Nightshade, who is a villainess more associated with Captain America. Her specialty is turning superheroes into werewolves, although she does other mad science too. Here she’s just obsessed with healing people with items directly sourced from the ground. Imagine it being announced that Mr. Freeze will be a recurring character in a prestige TV series, but  when you watch the show you find out he doesn’t have his containment suit, freeze ray, or even do any cryonics experiments.  He just makes his own ice cream. (Did you know Gotham’s Mr. Freeze is also Jesse Custer’s dad on Preacher?) She says she could figure out Bushmaster’s powers if she studied his blood work, yet when she has the opportunity her method of healing him is to just slather his wounds with nightshade. Shuri & Raina are better at superscience than Tilda.

Wouldn’t it be cooler if Nightshade was dealing mutagenic drugs? (She wasn’t involved with the “Bushmaster” drugs that turned kids rabid yet definitely not werewolves!) If they were even more ambitious, Luke could’ve teamed with Jack Russell the Werewolf By Night to combat her science with his magic.  By making her Black Mariah’s daughter, much of her independence as a character has been removed in favor of yet more Stokes family melodrama. It doesn’t seem like she has the supervillainess temperament. She does kill her mom with poison lipstick, & the look of smoldering disgust when she learns she didn’t inherit Harlem’s Paradise is fantastic. At least she gets her comic book hair … in the last scene.

Everything about this production is top notch including the acting. It is, however, missing something when it comes to the fantastic. It’s kind of like getting a good taco that nonetheless lacks guacamole even after you made a point of requesting it. Luke Cage season 2 has a lot a great elements, but it just didn’t convince me that being so grounded was the right move for thirteen hours. So … werewolves in Luke Cage season 3?

They’re finally doing a Marvel Legends Netflix Luke with Claire Temple! An SDCC exclusive The Defenders set features him in a repainted shirt because the bullet riddled hoodie budget got eaten up by Colleen Wing & the Danny Rand nobody wanted. We’re still missing Misty Knight & Elektra in her red The Hand costume! As cool as these are, it’s a bummer Hasbro hasn’t shown Agents of SHIELD the same love. It’s odd they never made Quake or May since it seems like they could kitbash them needing just new heads. Ghost Rider would be great even if they couldn’t do his Hellcharger. Madame Hydra, Ruby, Graviton, & Mockingbird are also toyetic. Raina would be of paramount import to share with the Preacher toys as Tulip got snubbed. (This trend has bled into statues. Isn’t being the only person whose favorite candy is Necco Wafers punishment enough?) Sideshow’s 12″ comic book Luke Cage is really pricey for a toy without an alternate tiara & Afro head.