Two big Marvel releases happened on September 7! I don’t have a PS4, however, so no Spider-Man for me. That leaves me with … RUH-ROH! I ran a poll on The Twitter to decide whether I ought to subject myself to Iron Fist season two, & seventy-one percent of the voters were sadists.

Or are they? I was expecting to despise this based on its pedigree & underwhelming trailer, but it’s actually not bad? This was actually a bit of a disappointment as it forced my to revise the preliminary draft of schadenfreude I’d written. I’d originally planned to just watch the three episodes IMDB told me Alice Eve was in so Netflix will be forced to put the show out of our misery, but then it turned out she’s in the whole shebang. This was a wise move on the series’ part, as she’s a big reason this season succeeds. Step into the sun chamber for SPOILERS! 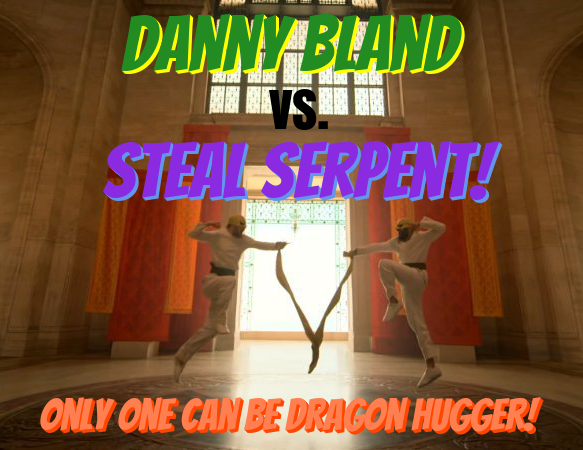 I tried watching some clips from the first season, but even its fight scenes managed to bore in their brevity.  There’s a phone commercial of a kid punching a giant igniferous crocodile in the head, yet Iron Fist couldn’t show its lead hugging a dragon? It was foisted upon an unsuspecting world by the same fiend that cursed it with Inhumans. (If Scott Buck made a Fantastic Four series, it’d be Challengers of the Unknown.) This is apparently better despite its new showrunner, M. Raven Metzner, being one of Elektra’s screenwriters. I felt like I understood the gist of what transpired last season, especially since the show helpfully illuminates the emotional beats between the players. If you did see season one, this would be a good article to “um, actually” me in the comments!

Finn Jones was fine as Ser Loras Tyrell in Game of Thrones, but he was never one of the top reasons I watched it. His Danny Rand is no longer grating, but Jessica Henwick’s Colleen Wing effortlessly outshines him. You wouldn’t expect Danny to be the dullest character in his own show, but somehow they manage. An attempt add pathos by suggesting his  glowy hand is addictive is undercooked in comparison to Ward Meachum’s addiction storyline. (Stand with him instead of Grant Ward!) He’s most engaging when realistically reacting to the aftermath of being kidnapped & tortured. At least they’ve given Jones more than fifteen minutes to learn the fight choreography this time. Danny looks like a competent fighter now, but it still seems like he should be dropping lackeys with much more finesse & speed even without resorting to his spiffy light-up fist.

Why doesn’t Danny wear an Iron Fist costume? He won’t shut up about how he earned the title of The Immortal Iron Fist, so why wouldn’t he wear the regalia all the time? It’s not like this millionaire cares whether it fits his corporation’s dress code. I’d even settle for him wearing the tracksuit he debuted at the end of The Defenders or his “Sweet Christmas!” hoodie if it would get him out of the banal outfits he wears like the olive jacket that evokes Oliver Queen. You don’t see Stephen Strange doffing his Sorcerer Supreme regalia! The fact that Netflix isn’t fully embracing the weirdness of the comics as a counterpoint to the more conventional Defenders series is a huge conceptual failing.

Iron Fist punches the nose off a truck in his introductory scene! Then he punches pot holes into pavement because Rand Enterprises has a sideline in asphalt. In a flashback featuring just the classic Iron Fist masks, Danny & Davos punch the blood out of each other! It’s cathartic to see Colleen beat down a whole gang of punkass teens, but the Daughters of the Dragon vs. Crane Sisters may be the best battle. New fight coordinator Clayton Barber paid off!

Sacha Dhawan’s Davos the Steel Serpent, not to be confused with Davos the Swiss city, is a compelling foe even if he doesn’t wear a costume either. (Madame Gao was selling drugs with his symbol back in Daredevil season one, although he loathes The Hand?) You’d think somebody even more obsessed with being the Iron Fist than Danny would don some raiment. The Steel Serpent (who’s never called that) is sort of like a reverse Killmonger who’s legitimutantly mad at Rand for ditching the great responsibility of safeguarding K’un-Lun from The Hand that came with his great power. Much to this regal ascetic’s chagrin, Joy Meachum pimps him out in a honey trap! Why is he treated as an antagonist for punching criminals to death whereas Punisher is a protagonist for shooting criminals to death? That is murderous vigilante double standard! Davos has to kill an innocent guy during a failed PR campaign to show he shouldn’t have the power (whereas the Punisher has miraculously never killed the the wrong people during his bloodbaths). How did he learn the ceremony to transfer Iron Fist power without having seen the scroll?

Family & friends betray each other! A hero questions if his approach is making a difference. A power vacuum leads to a bloody gang war. A villain reclaims his birthright while the hero loses his power! Magic artifacts are in play. Doppelgänger battle. Turk Barrett cameos > Stan Lee cameos! These are all pretty standard in the MCU by now. Iron Fist doesn’t screw them up, but it also doesn’t elevate or subvert them (until the finale). It feels like a solid first season of a show that’s learning to stretch it wings, which is troubling given that it’s season two already. What does add a spark is wildcard Mary Walker, especially since barely has any connection Iron Fist in the comics. (Haven’t they only fought once in a recent issue of Deadpool?)

This version of Typhoid Mary maintains her dissociative identities like Legion with a new spec ops backstory. (That seems like the go-to move for adaptations of complicated Marvel characters.) You may remember Alice Eve from a spectacular Black Mirror episode & a terrible Star Trek remake. She bring a subtly unnerving quality to both personalities, which are uncreatively named Mary & Walker. She doesn’t manifest her wild Typhoid Mary or vengeful Bloody Mary alters though. She also comes with twin tactical machetes!

The wrong-yet-right reimagining (shades of the underrated Gotham) of Mary has is intriguing. Ann Nocenti created her as Karen Page & Elektra in one body because she was sick of the virgin-whore dichotomy in female comics characters. Iron Fist doesn’t take the place of Daredevil in addition to her new commando origin, so the character is divorced from her original sexual context. (Are Czech demon knives the same as Ukranian Uton knives?) The “Walker” persona emerged later as an integrated personality showing she can be a heroine instead of just a victim or villainess. (This positive step forward in neurodivergent representation has been mostly regressed by subsequent stories.) While I’m usually in Patton Oswalt’s camp, this approach to works. I can still see how this gig-obsessed mercenary will become Typhoid Mary, whereas Luke Cage’s mild-mannered apothecary, Tilda Johnson, doesn’t seem like she’d blossom into Nightshade, the mad scientist with a passion for whips & werewolves.

It’s a pity Mary Walker doesn’t display her pyrokinetic, telekinetic, & telepathic powers. While they can’t pin them to an X-Gene yet, this would’ve been a prime example of when to shift to Terrigensis. I feel like Agents of SHIELD did all that Inhumans world building for nothing. Mary was involved in shady experiments in the comics & Jessica Jones featured military industrial complex augmentation, so it’s odd they were omitted when they made her a veteran. I will also accept magical empowerment. Maybe she already has powers but we didn’t get to see them since we never saw her as Typhoid? Alice Eve supplies her own groovy mutation of Heterochromia iridum.

Based on how they handled the USA flag on Nuke’s face & the Purple Man, I’m worried we’ll never see Typhoid Mary with half her face painted white. A fogged mirror reflection doesn’t count. I realize that many of her costumes are skimpy, but surely they could come up with something more practical that incorporates elements from the comics. That’s what they have a costume designer for. Wait, do they not have a costume designer? Did they just ask Alice Eve to bring her own gym clothes to the set? 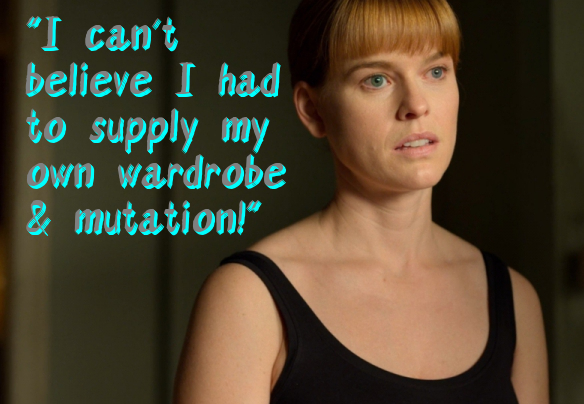 There’s something about Typhoid Mary!

Much like its brethren, a main failing of this is its aesthetics. This would be less of an issue if it wasn’t based off more dynamic comic books. Everything looks washed out but not in an artsy Zack Snyder way. Even putting aside the lack of superhero costumes, the clothes are drab & mundane. The set dressing lacks personality, with characters living in sparsely decorated lofts that are either vaguely Bohemian, generically affluent, or ascetic squalor depending upon their alignment. Why does this look so economical? Agents of SHIELD has been ribbed for its TV budget not matching the visuals of its big screen brethren, but even it can punch above its weight class when it applies itself. Iron Fist has half the episodes & less extravagant spectacle, but it sometimes feels like a fan film with better cinematography. Aren’t Netflix & Disney supposed to have more money to throw around?

Most of the Defenders shows drag at thirteen episodes that frequently last over an hour. Thankfully this is only ten episodes like Cloak & Dagger. Each episode is under an hour, so it’s mercifully free of extraneous scenes. Maybe the story could’ve been told in fewer installments, but it didn’t put me to sleep.

The big change at the end is that Colleen Wing becomes the new Iron Fist! It’s like they responded to the criticism that Danny is boring & an an Asian lead would remove the cringey Mighty Whitey aspect. Marvel acknowledged their lead wasn’t working! Danny even has the wisdom to acknowledge he’s unworthy to wield Shou-Lao’s power, which is shocking given all his dumb decisions. This is a cool move even if she probably won’t put on a costume besides a tracksuit. Let’s hope they don’t walk back this passing of the mantle.

Despite being depowered, Danny can still shoot chi-bullets from Orson Randall’s stolen pistols? Davos doesn’t die. More excitingly, Misty’s going to get her arm blinged out to smack some sense into crimester Luke Cage! Also Walker sets aside her professional code to become Joy’s new bestie whether she likes it or not.

When the early reviews noted this was a big improvement over season one, I thought it was being damned with faint praise. To my surprise it was actually enjoyable! This wasn’t a novel story, but it didn’t make any big missteps. Not only did it avoid deteriorating in the back half, it might have the best ending of the Netflix MCU! Now when is Typhoid Mary’s series?

20 thoughts on “Iron Fist’s Second Season Is A Sucker Punch?”