Netflix finally unleashed The Chilling Adventures of Sabrina upon the mortal realm! (Castlevania season two is also streaming, although I’m still not clear why it’s packaged in separate episodes rather than an animated movie.) I’m going to do a SPOILER review of the whole spooky season below! 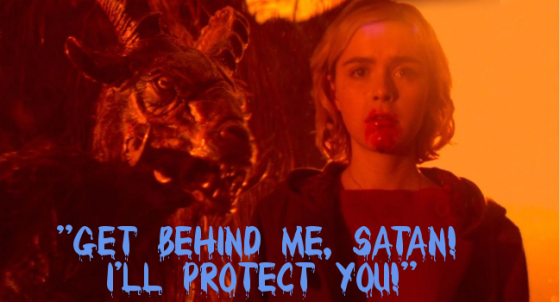 Its trailer framed it like a zany comedy although the footage itself looked like suspenseful horror. The final product is more tonally cohesive. Although technically a remake of Sabrina the Teenage Witch, this is based on the Archie Comics title of the same name  by Roberto Aguirre-Sacasa. He adapted it too. (He hasn’t finished it or Afterlife With Archie because he got sidetracked by television.) So it’s more faithful to the source material than Riverdale & less bleak. (At this point Riverdale is less an Archie adaptation than full-on Stephen King fanfiction.) The opening credits (strangely missing Susie & one of The Weird Sisters) even use Robert Hack’s art.

Unlike Riverdale’s leads, Kiernan Shipka is actually in the right age range for the title role! Both are Scorpios too. She’s caught between being a wunderkind upstart who challenges the corrupt system & a reckless maverick who impetuously endangers everyone by meddling with forces she doesn’t comprehend. The series vacillates so evenly on this that she’s not as dynamic as you’d expect from that description. Sabrina suffers from Netflix Protagonist Syndrome where she gets upstaged by the supporting cast. Thankfully she’s still leagues ahead of Archie Andrews. (If she popped up among Riverdale’s muggles, her character would be electrifying by default.) Her romance with Harvey Kinkle is surprisingly palatable if chaste.

In the original television show, Salem became the best talking cat since Behemoth! (He originally was a mute ginger.) Why doesn’t new Salem talk after his introductory scene? Sabrina & Salem just have infrequent Lassie-style conversations from thence onward. This is ridiculous as sassy Salem is the selling point of Sabrina! This is objectively wrong since he speaks in the comics! Unfortunately Shipka diverges from Spellman by being allergic to cats. With today’s medication & film editing, this isn’t an excuse for the shortage of Salem screentime. It’s really the creator’s boneheaded decision. How do they have worse talking cat scenes than a twenty year old series with a fraction of the budget? They waste so much time on characters who aren’t verbose felines! My own black familiar was so distressed by this sidelining that she only requested two lap rubs during the entire ten hours. This Salem is also missing his backstory of having been a human cursed to live as cat for attempted world domination.

There’s a big to-do about getting Sabrina to sign The Beast’s Book for her Dark Baptism, yet her father signed it for her when she was a baby. Even before that, her mother had her baptized Christian to sell her soul to God. Preacher didn’t explain how relatives can barter their kin’s souls & neither does this. For all the furor over Sabrina’s choice, her parents already made it for her? If Sabrina is upset over signing away her soul to Satan without informed consent, shouldn’t she be equally upset about what her mother did to her? She knows even less of God’s nature since he doesn’t do personal appearances, so her soul being bound to the service of God could be a much worse fate!

The series don’t erroneously insist its Devil worshipers are Anton Lavey (former roommate of Togar from Roar) & The Church of Satan, which means they put more effort into research than American Horror Story: Apocalypse. (Aleister Crowley & some more unexpected historical personages like Hildegard Von Bingen are posthumously implicated.) The dialogue was written by non-believers, so much of it is still tinged with anti-Satanic propaganda. While The Church of Night talks a big game about personal freedom, they’re actually about obedience. (If you want to be more charitable, they acknowledge the reality that true independence in life is illusory.) While they sadly don’t subvert the belief that Satanism is inherently evil, it works as a metaphor to show how organized religions use tradition as justification to marginalize women. I fear most will just take it at face value that Satanists are bad, especially since Satan is an active participant. At least there’s a variety of perspectives displayed within the religion for extra drama.

At first it seems like CAOS should’ve been named be Sabrina Spellman Vs. The Patriarchy! She’s even going to take down Satan himself! (I don’t quite get her motive.) Once she overcomes magic school harrowing, however, this theme goes on the backburner. The series does add some nuance to this. Women like Zelda, Lady Blackwood, & Prudence (who really wants to sit upon a throne of skulls in a pretty dress) are complicit in the current system. Blackwood avoids straw misogynist speeches. In regular high school, Principal Hawthorne is obstructive because he’s a tool of the school board. Sabrina fights homophobia & lynching by turning it back on bullies, which is effective but ethically questionable.

The Academy Of Unseen Arts banning familiars doesn’t make sense aside from reducing the amount of animals onscreen. (It probably doesn’t have an orangutan librarian like The Unseen University.) Don’t make familiars so common if you can’t go full Golden Compass. Cousin Ambrose’s two cobra familiars are replaced by a mouse?

It does the same stupid thing as Harry Potter where being a witch is determined by bloodlines. This is as bad as Midichlorians. Tying magic to genetics makes it seem both elitist & non-mystical. Calling Sabrina half-witch is like saying you can be born half-dentist. Everybody should be able to learn magic if they apply themselves! Sabrina not wanting to choose betwixt the magic & mortal worlds also evokes Lost Girl.

Michelle Gomez was born to play Madam Satan inhabiting Ms. Wardwell’s body. (She used different aliases in the comics for additional confusion.) She gives a performance worthy of Hammer Films’ halcyon days! True to her Doctor Who & Gotham pedigree, her performance is the perfect degree of malevolence coated in a campy shell of insincerity. Now if only we could get some scenes of her & Salem being catty with each other! (Kevin Keller namedropped Madam Satan in Riverdale’s first season, so they’re either set in different realities or he’s way more knowledgeable about the occult than anyone suspects.)

Miranda “Eowyn” Otto is devoutly arch Aunt Zelda. Lucy “Etta Candy” Davis is the jolly yet put upon Aunt Hilda. They have a Cain & Abel thing going on. Coupling’s Richard Coyle is a surprisingly effective authoritarian. Michael Hogan shows up as Harvey’s grandpa to check witches off his hunting list like Cylons, werewolves, & metahumans. (His career is a protracted audition for Kraven The Hunter.)

Satan reminds me of Doctor Who’s nifty Neo-Nimon, although they were probably aiming for Pan’s Labyrinth. It would’ve been more unique if Lucifer acted like the version in Zelda’s dream. He doesn’t fornicate with His acolytes as accounts of witchcraft requirements led us to believe. At least his depiction is more respectful than reducing the Egyptian God Apophis to a demonic tapeworm. Since she was raised by witches, Sabrina’s antipathy towards Him feels like teenage petulance. There is irony in her rejecting Lucifer out of pride.

The production design is top flight. Greendale has a semi-retro vibe that avoids looking cartoony. (Its murder rate is also marginally lower than the next town over.) The first episode specifically sets the tale in the present year unlike the period piece comics, although Halloween isn’t a Friday in 2018. The colors pop. The edges of the woods are filmed fuzzily in shallow focus to imply a blurring of dimensions. The prosthetics & CGI are well integrated, although the skull-jellyfish from the credits are no-shows so far. The school’s paintings were made by Clive Barker!

Because the series is unabashedly horror, paradoxically its fantasy elements aren’t as shocking as what transpires on a typical Riverdale episode. It does have a Ben Button cameo that contradicts his fate on the sister show & vice versa. A bat got lost on the way to Wayne Manor & crashes through Sabrina’s window. Who stabbed the witch with the iguana to death? They forgot this plot line.

“Dreams in a Witch House” was my favorite episode. Harvey’s brother getting zombified, on the other paw, was underwhelming. Although revealed to be a soulless cannibal, his brother hadn’t tried to hurt anyone besides their emotionally abusive father. The more urgent plight of The Weird Sister imperiled by Sabrina botching the spell wasn’t too sympathetic since she killed him in the first place. Everything got sorted out well before the zombie apocalypse began. It’s not the chaos the show’s acronym almost spells.

In His ultimate foresight, Satan unleashes Madame Satan to ensure Sabrina signs His book. She calls in the vengeful spirits of The Greendale Thirteen. (The prevailing theory is that witch hunts were bad because innocent women were tortured & executed. In the context of this series where witches are real, however, one could argue that the Puritans weren’t thorough enough.) They in turn summon The Red Butcher (I wish we saw more of it) to slay the descendants of the humans that killed them & the witches who let them to save themselves. There is a lot of subcontracting to Satan’s scheme!

After ten episodes, Madame Satan has finally engineered a scenario where Sabrina feels compelled to sign Satan’s book to save the day. To coincide with her Satanic power upgrade, her hair goes white in the finale like Barbara Kean. This is in line with the Marvel trend of dragging an origin out over a whole season, though less egregious as I thought Shipka’s hair color was already acceptable for the role. This change would be more dramatic if Sabrina hadn’t already been shown to be ruthless. Meanwhile Roz develops The Cunning as she goes blind, & non-binary Susie is visited by an ancestor’s ghost. Giving these mortals direct magic connections of their own makes Sabrina stand out less, but I guess the writers thought they needed something extra to justify their return next year. Zelda ill-advisedly steals one of Faustus Blackwood’s babies. Big damn heroine Hilda’s new beau, Dr. Cerberus the weatherman turned vampire-cosplaying bookseller played by Battlestar Galactica’s Alessandro Juliani, has weird eyes so he may be a legitimutant monster! (Everything about that sentence is wonderful.)

So The Chilling Adventures Of Sabrina’s first season was entertaining! It wasn’t particularly scary, but maybe they’re courting a younger demographic? Or maybe I’m just terribly desensitized? Hopefully the horror quotient will increase. The whole cast is charismatic. It’s not as subversive as it could’ve been, but then I really didn’t expect it to be either. They’re already filming season two, so I hope it’s not too late to give Salem all the dialogue! Go ahead & rename it The Chilling Adventures Of Salem!

For this year’s Jack-O-Lantern, I made Mysterio! Instead of being faddish with Venom, I carved a pumpkin that’ll still be topical next year. It kind of works? If you don’t see it, just pretend like it’s supposed to be a yokai of some sort. 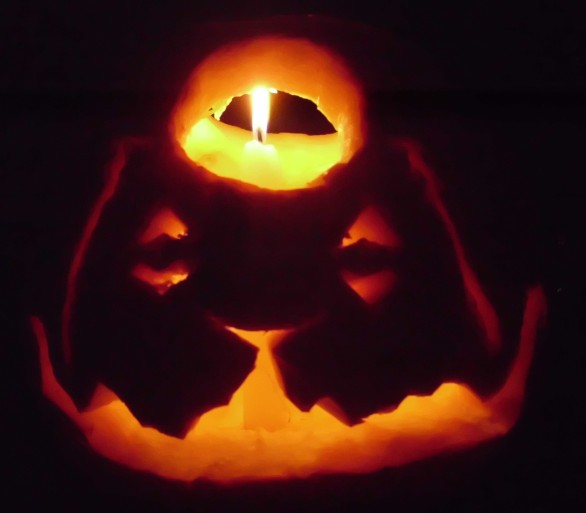 11 thoughts on “The Chilling Adventures Of Sabrina Will Bewitch You”