I never watched the original She-Ra & the Princesses of Power (ditto He-Man & the  Masters of the Universe, though I don’t believe any of them mastered universes based on the movie adaptation I have seen), but my sister had most of the toys. I really enjoyed Noelle Stevenson’s Nimona (Which knight should Lee “Hammertime Piemaker” Pace voice in the movie?), but I didn’t like Lumberjanes as much because I needed more than one panel of The Holy Kitten! Her She-Ra reboot, however, is legitimutantly delightful! It’s reminiscent of the gone-too-soon Thundercats relaunch, particularly in its mythology. Like the new Ducktales & TMNT, it finds plenty of room for comedic characterization betwixt the action. (There’a lot of histrionic face-squishing!) The new intro is a definite improvement over the expository original. The bright pastel colors maintain a retro 80’s vibe. This seems like the opposite approach that David Goyer would’ve taken, & that is for the best! Catch the SPOILER cooties below because PRINCESSES ARE CONTAGIOUS MONSTERS!

The redesigns received a lot of vitriol from people who refused to understand the characters had been aged down to teens, but they work in context. There’s more variety in body types, races, & fashion to differentiate the princesses beyond hair & dress colors. She-Ra’s form is noticeably more muscular than Adora’s already athletic build. She’s not so much wearing a mini-skirt as it’s the part of her tunic that billows dramatically over her shorts. She-Ra still looks like an instantly recognizable Valkyrie! It no longer looks like Catra & Scorpia are twins in different Furry gear. Both rock Princess Prom attire! Bow keeps his midriff-bearing breastplate & gains high tops.

This is one of the rare shows where nearly everyone is likeable. She-Ra is has the right blend of strengths & flaws. Glimmer’s rebellious attitude towards her mom is intriguingly a quest for more responsibility. Endearingly nerdy Bow may be the token boy, but the writers avoid damselling him too much. The Horde is composed of sympathetic individuals instead of being a faceless evil. Even Hordak is surprisingly laid back & reasonable for an evil overlord.

Unlike the MOTU Classics action figure bios, they don’t attempt to legitimize the characters by giving them real names. There’s no reason Etherian (or Eternian) names need to coincide with conventional Earth naming patterns. Everybody’s parents were just aces at nominative determinism on their birth certificates. Netossa best exemplifies this. Maybe Princess Perfuma smelled unnaturally pleasant as a newborn? Only Adora, Light Weaver, & Horsey have need of aliases since they transform.

Adora’s loyalty shifts when she sees The Horde ravage a satyr village which she’d been told was a military installation. Why didn’t Shadow Weaver instruct her that destroying civilian enemies is always noble? That was some shoddy indoctrination!

PROTECT CATRA! She’s written exactly like a cat! She even used to ensnuggle Adora in her bunk! (Now you have a visual for my neologism.) Catra also hates to be scooped up in hugs by Scorpia despite it being adorable! She loves driving tanks & drawing pictures of her human. She’s the only cat lady with stripes, freckles, & heterochromia! (I wish her fur was violet since her mask transformed her into purple pantheress in the original.) Catra feels betrayed by Adora (& vice versa). It’s very heartbreaking! Catra taking down Shadow Weaver was cathartic.

Kowl & Loo-Kee are just dolls, yet Imp (the lovechild of Nightcrawler & a flying monkey) & Swiftwind are alive? Where’s the transmogrified lizard? Why doesn’t Adora get wings & a horn too when The Sword of Protection transforms like a magical girl? Clawdeen is completely absent despite looking like it’d fit right in as a possibly transgender pink lion. Swiftwind (or arguably Catra) & She-Ra have the familar/witch repartee that CAOS lacked.

There are plenty of possible romantic relationships of both homosexual & heterosexual varieties yet none are confirmed aside from Netossa & Spinerella. (Peek-A-Blue & Sweet Bee are dating but aren’t present before.) Even the heterosexual pairings hedge their bets by insisting declarations of love are of the platonic variety. At least there’s no double standard in teens concealing their true feelings. (Actually Sea Hawk is honest in his devotion to Mermista.) It’s realistic for the characters & I can read subtext like backgrounds being bisexual flags, yet sometimes it feels like DreamWorks & Netflix wanted plausible deniability to reduce angry letters from homophobes. (Whither the gay baby jail?) 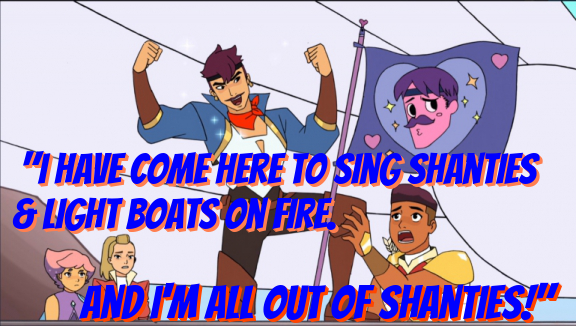 Princess Entrapta only eats tiny food. She is the smallest princess next to Frosta the Lady Lyanna Mormont-Katara hybrid. She made herself robot parents. As a pure Ravenclaw, she is truly amoral. She has similar feline energy to Catra. I wish she & Scorpia were crystal-empowered to counterbalance the Etherian abilities of the Alliance.

The finale is very epic. I was convinced it would end on a cliffhanger with the Horde victorious in taking out the Bright Moon crystal. Instead the Princess Alliance reforms & defeats them with the combined power of rainbow! Glimmer’s powers get fixed too. I actually didn’t mind? This could’ve been a cop-out, but somehow the series made it work. Its theme song was telling the truth about winning in the end.

The all women writers’ room (although there a couple male writers credited) worked their magic. It fills a niche left by The Legend of Korra. Hopefully the next season will have more Horde captains like Leech, who was my favorite toy. (So far only Super7 is doing toys for the reboot in the form of an absurdly pricey She-Ra & Catra set.) The revamped She-Ra & the Princesses of Power does honor to Grayskull! (Or at least I think it does as someone with limited preconceived notions about the original.)

In North America, Christmas season begins as soon as Halloween ends. (In the northern third of North America, Thanksgiving falls prior to Halloween to be even less of a stopgap.) In 2018 the Inhumans movie marked the beginning of Christmas music on the radio.  This feels odious yet understandable as there is only one good Thanksgiving song to celebrate the gluttony. So in honor of this holiday, here’s some random musings on cannibalism!

Not only is it returning for a sixth season, Agents of SHIELD has already been greenlit for a seventh! It turns out people really like this program! Maybe now the show can finally get some Marvel Legends love? After all that foreshadowing, they’d better introduce Griffin & Hellcow! Can it use Wendigos? If so, can Melinda May turn into one? Ming-Na Wendigo could be the next Jemmacide!

Hannibal was ironic because it starred a Danish eating people.

How can you have a Wendigo sandwich where human flesh isn’t even an ingredient?

I’m still waiting for the Fantastic Beasts movie with Eve Harlow as young Bellatrix Lestrange. Cue time turner shenanigans if need be, although matching movie to book continuity seems to be far less of an issue now. So that means I’ll haven’t decided what to write about for next time. Come back next week to be surprised before we head into the December of too much geeky film & television happening at once!