By now my recap of the latest DC TV premieres is officially old hat. What’s even older is Gotham! It’s been off the air for six months! (Longer, if you’re reading this in the future.) So now the time is ripe for more custom toys! A big oversight of Diamond Select Toys’ prematurely ended toyline was never making a Joker. So I rectified that with a rendition of his season five look. Obviously the spiffy one prominently worn in “Ace Chemicals,” not the series finale version with the gratuitously hideous visage. (Underneath the purple trenchcoat for the final outfit, Mr. J wore vintage Edward Nygma.) Now I’m sharing this creation because you are my very best friend.

“I wanna be the star of the show!”

As soon as I learned a digitized Cameron Monaghan was was starring in the Jedi: Fallen Order video game, I decided Hasbro should make a Black Series figure of his Cal Kestis. Whereas other Jedi say “Use The Force,” he says “USE THE TONGS, CARL!” Once it was revealed his toy would be released on Triple Force Friday, I had to find a suitable body to graft his head onto for a Gotham Joker custom as his Dash Rendar-ish mechanic attire wouldn’t do.

Whilst in Target, I gave a second look at the Batman Eightieth Anniversary series I was utterly underwhelmed by at Toy Fair. (Sadly the production version of Poison Ivy looks much worse than than the prototype.) For a homage figure, Joker’s oversized noggin resembles neither Jack Nicholson, Toy Biz’s 1989 figure, most artwork of that era, nor its own box art. Though I hated its Joker from the neck up, the rest of him looked essentially perfect to save me on sculpting. As it was the last one left, I decided to preemptively buy it rather than risk it being impossible to find at retail after Cal’s release. I’m unaccustomed to exhibiting foresight! At this point I wasn’t even sure both figures would be to scale since Mattel’s DC toys tended to be somewhat larger than a true 6″ scale. I hoped Cal would be on the tall side for a Star Wars toy. Whether the custom would scale with DST’s Gotham figures was another concern rattling around my mind.

Since I was satisfied with Mattel’s earlier Joker despite its comparatively worse articulation, I was planning to return the new one if Cal’s head didn’t look like it’d match. That meant I needed to get Cal as soon as possible to ensure I wouldn’t exceed the ninety day return window. The Target & Walmart I checked after work on Force Friday were picked clean. I had to pay Gamestop’s late fee to get Cal Ketsis. (So much for my vow not to pay extra for non-exclusive items there!) Since I paid a premium just for its noggin, I’m sure its value will soon be through the floor on eBay. At least I got a cute droid & a new lightsaber too.

I hate Mattel for making the blue DC Multiverse boxes much harder to open from the bottom than they needed to be. I brook no inconvenience! Joker’s left biceps wants to crack in twain, which is also less than ideal.

“Princes of the Universe” intensifies!

I used to accidentally behead my toys as a youngling; now I do it intentionally. Boil & pop was used to remove Cal’s & the Joker’s heads. Cal’s has a tiny barbell joint within whereas the Jokers was attached to a huge ball hinged in the neck molded as part of the torso. Transplanting Cal’s neck into a new body looked like it’s be a simpler operation & more aesthetically pleasing. So I yanked Cal’s neck out of his torso & reunited it with his head.

I can’t believe he’s not the Joker!

Removing the the Harlequin of Hate’s neck proved more difficult as it’s molded as part of the torso in hard ABS plastic. Even soaking it in boiling water did little to soften it up, but I eventually succeeded after much slicing. I have decapitated the Joker. His stubborn neck damaged a brand new razor blade. Once I finally cut away the Joker’s neck, I found a hard plastic plug with a cross-shaped depression. Cal’s neck wasn’t going to fit in the newly vacated collar with that in the way. Nothing was easy about this head transplant. The plug was removed & the collar hollowed out further. Cal’s neck had to be sanded down to to fit. Once united, the head & body make a pretty snug match.

I couldn’t get a full toothy grin for the Ace of Knaves without massive resculpting, but I did want to put a smile on his face. Since I wasn’t making Jerome Valeska, I didn’t want giant comprachicos scars gashed into his cheeks. (While Jeremiah is the better dressed Valeska, I prefer Jerome’s joie de vivre.) I carefully pressed my X-Acto blade into the corners of this mouth so he at least has a demented smirk. 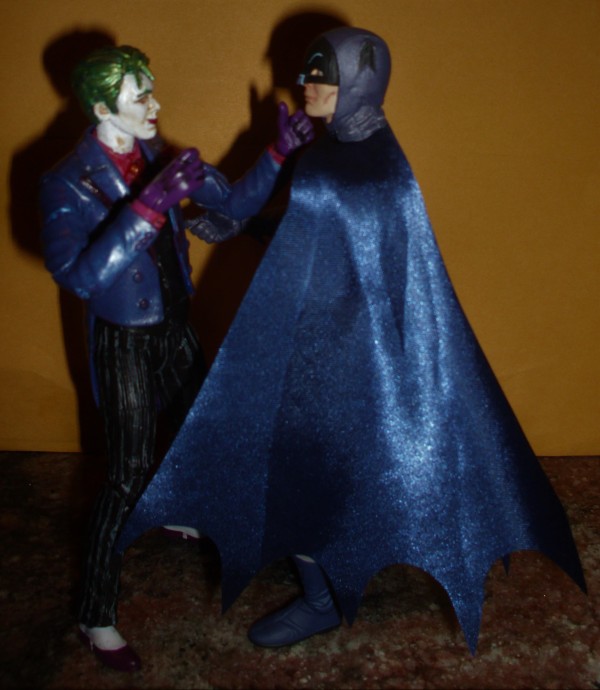 “Without me, you’re just a joke without a punchline!”

“You dirty rat, you killed my brother. Thank you.”

Instead of leaving his hair parted in the middle, I sliced the left strands & folded them over. WB wouldn’t let either Valeska have green hair until the final season. (Then he was the Joker in everything but name.) Even when they relented, the lighting generally made it difficult to discern it actually was green. I gave Mr. J’s hair a black base coat with an abundance of metallic dark green to make it more visible than on screen. I still wasn’t satisfied because I associate the Joker with more a vivid color. So I gave him light metallic green highlights. I like my hues like a like my trans fats: saturated!

“Without an innate diathesis, the stress of one bad day would be insufficient to drive anyone insane.”

Also due to lighting, I was unsure whether Mr. Valeska’s coat was blue or purple. (Perhaps he wore jackets in both colors & switched them out each scene to sow further confusion?) I painted his coat metallic blue, & it looked spiffy. As a traditionalist, however, I still felt the Joker needs to wear purple whenever possible. (This is contrary Alex Ross’s idiotic insistence on only dressing him in boring black.) So I drybrushed royal purple over it. This gave it an interesting depth, but it wasn’t consistently shiny enough. So I finally just mixed the both together. Now it upholds both the show’s unique palette & his signature violet vestment. I thought his lapels’ edging was black for the longest time until I saw an image with the light tuned up.

“Ever dance with the Devil in the pale moonlight?”

The stringy tie insert was pried out & filled in to create a more traditional necktie. Jeremiah’s boutonniere is dinky, whereas the default flower on Mattel’s toy is gigantic with an even bigger hole to insert it. So I left that inaccurate. If you prefer to sculpt a smaller lapel flower, not make a new tie, & save on black paint, use the new Alfred Pennyworth as his body. Aside from him being rarer, there’s one good reason not to:

The acid-squirting flower accessory is ingenious. I’m totally using that even though Gotham didn’t. (It’s still not as unforgivable an oversight of not giving Riddler the cane they made for him.) Jeremiah could’ve used it to turn Harvey Dent into Two-Face. (The fact that The Dark Knight didn’t use this for Dent’s transformation sums up how ridiculous that movie is. The Batman should get Oscar Isaac for Two-Face. His good side can be as vacant as he was in Annihilation while the scarred side has charisma for days.) Contrariwise his jester skull cane is too gaudy.

“You should’ve quit while you had a head!”

My cause of death: painting pinstripe pants. The Joker’s legs have pinstripes sculpted onto them, which you’d think would make it easier. It doesn’t. The stripes are etched too close together, giving it almost a corduroy texture. I bravely attempted painting the stripes freehand with my smallest brush because I didn’t have any nail decal tape to mask them. The lines became erratic, even for me. It turned out the sculpted lines & wrinkles were pushing my brush bristles apart. I wouldn’t even bother if I didn’t want the vest & pants to blend together. My system of spacing the stripes & then painting stripes betwixt those was sound. I took “pants to be darkened” as inspiration to make their irregularity less obvious with a black wash. I left the shoes alone because they look snazzy.

The world’s tiniest straight razor was constructed from wood & plastic. I figured he’d need a unique weapon he wouldn’t have to return like this pistol on loan from Metal Gear Solid 2’s Fortune. It’s getting harder to find spare weapons. Some companies are still permanently molding guns into holsters! (Glares angrily at DST’s Westworld series.) 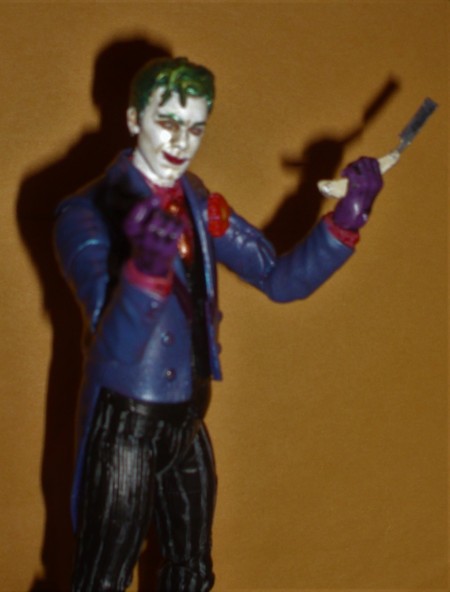 In Gotham City even the straight razors are crooked!

The New York Times acknowledged Cameron Monaghan as the third best Joker. I might quibble with the ranking if it wasn’t behind a paywall. Do they still have more legitimacy than assorted websites making similar listicles in conjunction with the overrated Joker movie, which is merely a Rule 63 Mama Mia? (The Powerpuff Girls would still pulverize Joker, The Guardian, especially a version that’s so mundane he’s got nothing going for him.) Even when portraying a corpse, he’s still a better Clown Prince of Crime than some Oscar winners. As far as live action goes, Monaghan has the most screentime after Cesar Romero. (Somebody fact check that for me.) He definitely has the distinction of playing two iterations in the same work. I love that kooky loophole for the show’s inconsistent claim that he wasn’t the genuine Joker by giving him a surprise identical twin. Unless Tank Girl was the real Joker?

The completed Joker scales with DST’s series provided you don’t know how tall he’s supposed to be. If it weren’t for Star Wars, I doubt I would’ve made him. Maybe I’ll make a Jeromeker one day too? Now that I’ve gotten the Joker out of the way, it’s time to move on to my villain backlog of Tabitha Galavan, Scarecrow, Poison Ivy, Firefly, Professor Pyg, Fish Mooney, Mad Hatter, Sofia Falcone, Ventriloquist & Scarface, Ra’s al Ghul, Solomon Grundy, dark Lee, Harley Quinn, Magpie, & Bane. Ha ha! I’m not doing their Bane.

“It happens to a lot of guys?”

8 thoughts on “The Joker Is Wild In Gotham!”