I promised the next blog would be less topical. So now without further ado, here’s my latest Gotham custom! Wait … that ain’t right! NOOOOO!!!! My personal brand is ruined! Whoopsie! 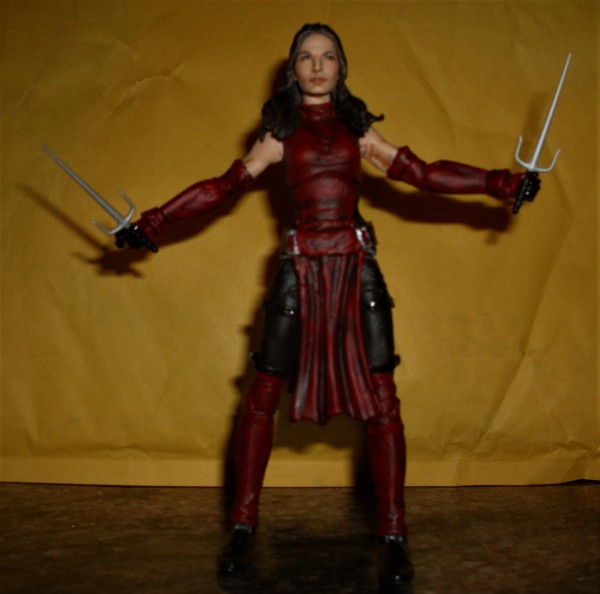 The Defenders Elektra was made from the MCU Elektra in her awful debut Daredevil outfit. I held off on making this for the longest time because I presumed Hasbro would get to it in a second Netflix assortment. Then Marvel & Netflix had an epic falling out that cancelled all the Defenders series! Toy Fair 2020 confirmed this Elektra isn’t in the pipeline. (SDCC will be a different kettle of fish.) Elodie Yung did a great job portraying an inconsistently written character, so hopefully Marvel Studios brings her back if it ever decides to use Elektra Natchios again once the rights revert. 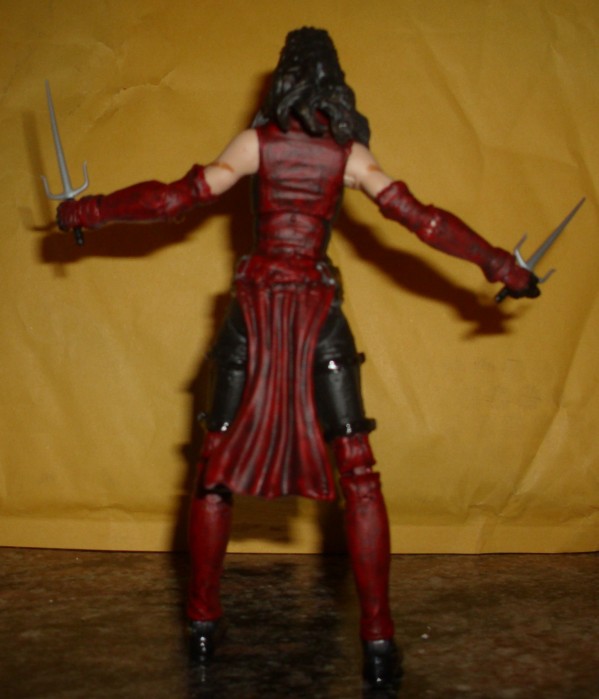 I recently got a loose Elektra dirt cheap on eBay. It actually wasn’t that difficult to upgrade her proto-suit into her red The Hand one. (Had the series continued, maybe there would’ve been a white variant too.) Her back pockets & the seams of her upper legs were sanded off. Clear rubber bands were glued across her biceps to mark the tops of her gloves. The straps on her legs were made of the same. Her loincloth was sliced off Baron Zemo’s belt. The belt was made from paper towel.

How to redo her hair was most perplexing. I’d originally planned to graft on the locks I snipped off Scarlet With to make Speedy, but the rubber was too thick to blend easily with her existing hair. I could’ve also scalped Elektra & affixed the hair I pried off The Stabby Queen. Using the hair from Claire Temple would work even better, but I didn’t feel like buying a whole figure just for its hair. I’d actually wind up buying two figures as my affection for Rosario Dawson would inspire me to own an un-ruined one despite how banal Claire looks. (Fie on USA for shunting Briarpatch, a mini-Josie & The Pussycats reunion, behind wrestling on Mondays after only two episodes! It paired well with Thursday’s The Sinner, starring Darryl Zero, Negative Man, Reva Connors, & Victor Zsasz!)

“Shouldn’t that have liquefied your guts?”

It was then I realized that Elektra already provided all the hair she needed thanks to her alternate head. I popped out both ponytails & cut them in twain. I glued two sections behind her ears to fall over her shoulder. Her hair actually cascades over them in The Defenders, but it’d be a shame to cover up such exquisitely sculpted Elodie ears. The remaining hair chunks were halved again & glued together into the gap at the rear of her head. It should be longer in the back, but most people won’t see it from that angle or care. Of course now you do since I pointed it out.

“I dare you to eat a sandwich!”

Much like with Bebop & Rocksteady, paint rub is its Siegfried’s shoulder. The elbows swivel & hinge, so the elbow paint gets wrecked from either usage. Just imagine her elbows are a consistent red in these images. (Did you know elbows are named for the archaic unit of measurement know as an ell, which is equivalent to one forearm or cubit?) It’s less noticeable at her knee joints, which still move despite them never being flexed in these photos. At least I found a different brand of matte fixative that doesn’t make her look sweaty.

Even before my modifications, this Elektra looked like an out of proportion custom. The lower torso & legs were reused from Mary Jane & Jessica Jones. (I suppose that was the deciding factor in going with her ugly casual costume.) Her huge forearms made her look like Popeye. (The wraps I added to her upper arms give the illusion of balancing them out.) Elektra Natchios never skips arm day! Is there an exercise that only works forearms? The head floats a bit too high & is a smidge too large, which is more noticeable with her hair up. 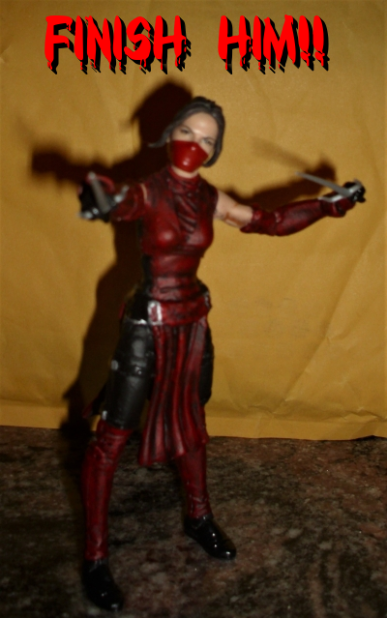 Why is Mileena wearing Skarlet’s color?

While the Mortal Kombat mask look was briefly adapted into the comics, the more protective iteration of The Hand suit inspired her look for the Marvel Strike Force game. The leg straps would be more useful as sai holsters but evoke the random cloth strips Elektra had around her bare thighs. The rectangular metal fasteners on her belt resemble the earrings Elektra used to wear. Adding a headscarf would maker look even more classic. Now I’m tempted to make another one in blue with purple hair for a winter weather Psylocke.

My first thought upon watching the 2020 Superb Owl halftime show was that Shakira was cosplaying Elektra. More likely she was cosplaying the humansona of her Zootopia character. Then J. Lo’s dancers dressed like The In-Betweener (who is already a Star Trek nod) whilst she looked Wrestlemania ready. (Becky’s Lynch’s black & yellow gear is actually an April O’Neil homage.) Jennifer Lopez was formerly engaged to Ben Affleck, & he is the ex-husband of Jennifer Garner who played Elektra in two films. Now I have circuitously justified this paragraph’s inclusion.

“Your application says you were The Black Sky of The Hand. Can you explain what that position entails?”

Elodie Yung also played the crimson clad ninja Jinx in GI Joe: Retaliation. The costumes aren’t identical, but they’re close enough that I now have a 6″ GI Joe figure to go with the ones Hasbro is finally producing. As I have minimal interest in that series, this digression is irrelevant. Meanwhile this tangent is more relevant to my interests: Without The Hand & Elektra, there’d be no Foot Clan or Raphael! Do you think Eastman’s & Laird’s Daredevil parody being more successful than the original rankled Stan Lee & Frank Miller? 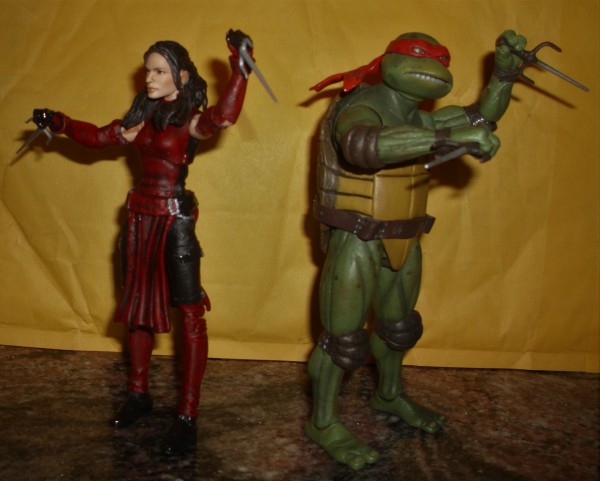 9 thoughts on “This Custom Is Elektra-fying!”