Hot on the heels of The Flash’s inadvertent sixth season finale, here comes She-Ra & The Princesses Of Power’s planned “fifth” & final season! Unlike season two, Netflix has blessed us with all the episodes at once! Rejoice in SPOILERS! If you’d prefer them musically, Catra sings the ominous minor key cover of the themesong fit for a modern horror film commercial. Then return soon for  Supergirl’s & Batwoman’s season finale reviews! 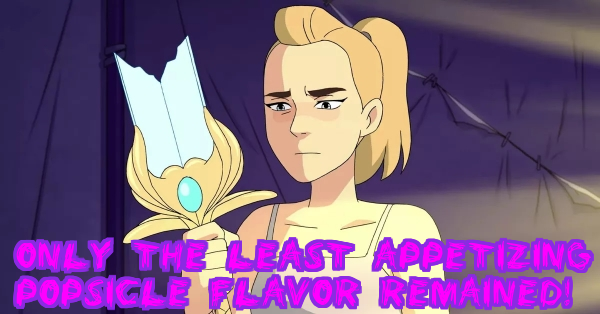 Although she was frequently upstaged by supporting characters, Adora has her strongest character arc here. After breaking her Sword of Protection & losing her She-Ra powers, she struggles to be useful to the Princess Alliance & recklessly charges into danger. She forsook being Light Hope’s pawn yet still yearns for a heroic destiny. When reunited, Catra calls her out on her martyr complex. Instead of focusing on dying for Etheria, Adora considers what she wants to live for. Aligning her type-A militarism with burgeoning feelings causes her rekindled She-Ra powers to fritz out. (Or maybe it’s from Horde Prime corrupting Princesses her powers are still linked to.)

The narcissistically solipsistic evangelist Horde Prime is nowhere as sympathetic as Hordak (or Horda-K as it’s pronounced in my neck of the woods). His devoted clones have probic vent weakness like Sontarans. Horde Prime’s signature color is neon green, which validates my eye-bleeding background color.

Horde Prime already wiped out The First Ones of Eternia. I was hoping we’d get flashbacks to some famous Eternians but no dice. So there’s no context for this Grayskull thing Adora keeps talking about. Can we get Noelle Stevenson to write the Masters of the Universe continuation with the all-star voice cast instead of Kevin Smith? She could trick me into caring about He-Man beyond his rogues gallery!

Everyone apologizes to each other for assorted transgressions as healthy character growth! This is especially true for Catra, who finally gets her redemption arc. Her propensity for betrayal now aids the Princess Alliance. The show realizes that cats get cuter the madder they get. Youngling Catra missed dinner hiding behind boxes just like a certain catsquatch did when she was a kitten kidnapped into her current residence! Catra jumps on Adora’s lap & tickles her face with her tail because this is actually a documentary.

Adora is able to transform into She-Ra to protect her friends. She even generates her own Sword of Protection charged with prismatic energy & can survive in space! She was Mjolnir all along! This She-Ra redesign is even better than the previous one (which is even fancier in cosplay). While incorporating elements of her friends’ costumes, it retains the hair-poof of dominance!

During a Catra rescue mission appropriately titled “Save the Cat,” the heroes accidentally break a Horde Prime clone. Wrong-Hordak has an existential crisis. He becomes one of the most delightful member of the resistance.

Melog is Clawdeen but changed because Steven Universe’s pink lion, Lion, is more famous now. (There was also a character named Melog in the original series.) I’d given up expecting Clawdeen! This shapeshifting emotional support familiar feels much more integral than CAOS’s Salem even though it doesn’t speak English either. Its companionship helps Catra move beyond her angry abandonment issues. Unfortunately we don’t get Leech & Mantenna too.

Scorpia sings during an fun undercover mission that suddenly gets dark. I was worried she died allowing her friends to escape. She was just learning to develop self-respect & have fun with her electro-pincers! Fortunately my dread was unjustified.

Its voice acting remains superlative, especially for big emotive moments. The pacing was so excited I got anxious taking a break midway through for sleep & food. All the subplots feel relevant. The battle scenes are much more confident than when they began. It helps that there are less fights with faceless drones & generic monsters. Brainwashed friends are more engaging foes.

Overcoming mind control when reminded of emotions or their pasts is one of those tropes that vexes me. Here they manage to it better. Horde Prime’s chips are superior to cyber-conversion. Nobody actually casts off their mental yokes after encouraging pep talks, but it does make thralls falter when tasked with killing their pals & lovers. Perfuma’s unwavering faith in her friends does matter, but it’s not the cure. That’s Entrapta’s & Bow’s (harried responsible dad armed with magnifying glass arrow) technological task.

I always recommend not skipping intros, but this time there’s an incentive. They change as allegiances shift. This may be helpful for tracking character alignments.

The underrated Netossa finally gets some spotlight. She’s kept detailed dossiers on how to defeat all the rebels should they go bad. (It turns out most are flammable!) So she’s Batman with the added benefit of legitimutant superpowers. Spinny also get to showcase why wind powers shouldn’t be underestimated.

Peekablue is now a Prince instead of a Princess. We don’t actually meet him, however, as it’s Double Trouble impersonating him. Likewise his paramour, Sweet Bee, doesn’t appear despite both being foreshadowed in season one. (I thought I saw a screencap of her on The Twitter, but it proved to be false.) The Star Siblings get their own episode.  Lonnie, Kyle, & Rogelio adopt Imp. Sadly they don’t speak this season, nor does Huntara. We don’t even see Grizzlor & Octavia.

In earlier seasons there was some ambiguity about how gay we were supposed to interpret the character dynamics. The final season is unambiguously very gay. This is an improvement over most series only revealing gay characters in the final episodes so they don’t have to worry about homophobic boycotts. (For instance, watch Scooby-Doo: Mystery Incorporated,which I’ve been advised is superior to SCOOB!) Kyle has a crush on Rogelio. Not only do they have a wedding anniversary, Netossa & Spinerella kiss in both the story & a revised title card. Catra says Adora broke her heart.

The most important moment is that the conclusion consummates Catradora. The friends to enemies to lovers arc parallels Nimona. Their reconciliation begins early enough in the season that this feels earned rather than fan servicey. They acknowledge each others’ flaws & misdeeds but decide they don’t want to be apart anymore. Proving Shadow Weaver wrong, their love saves Etheria!

Other colors in the orientation spectrum get happy endings too. Queen Glimmer & Bow finally commit to each other. (I don’t recall Bow & Perfuma officially breaking up, but everyone tacitly agrees that Bow & Glimmer is a better ‘ship.) Ditto Sea Hawk & Mermista, who once burnt a ship to know how he felt. There are hints Perfuma & Scorpia will become a couple, which would give us at least one bisexual. I approve of this pairing of spares because Scorpia deserves someone who appreciates her. Asexual representation is courtesy of platonic lab partners Entrapta & (Right) Hordak.

Although SPOP is generally regarded as the better written of the two classic series, it still seems Mattel & other rightsholders treat it as an afterthought. A new He-Man movie has been in development Hell for years without any known plans for his sister to get one too. (Despite or because of its gender incongruity, Adora lucked out not being called She-Woman.) In the toy & comics continuation, She-Ra becomes the evil Despera after being possessed by Horde Prime’s ghost. The undervaluation allowed Stevenson creative freedom to take much bigger risks. (Despite MOTU’s homoerotic subtext, I doubt there will ever be an official reboot with Prince Adam/He-Man as anything but utterly heteronormative.) It’s a bummer both Mattel & Super 7 half-assed their toy lines in opposite directions before fizzling out.

The series ends on a very satisfying note of the Best Friends Squad going off on one last mission to spread magic to the galaxy. (Entrapta made Bow a spacesuit with an abs window while Catra’s has the cutest kitty ears on her helmet.) She-Ra transforms Horde Prime’s mothership into a giant orbital tree to reinforce creation over destruction. All of Horde Prime’s clones are granted autonomy. It kind of feels like there should be a massive shared wedding in the finale. (Either that or some buzzkill war crimes trials. That’d undermine the foes to friends message it shares with The Unbeatable Squirrel Girl.) Everybody was so likeable I still want more episodes of these goofballs!  I’m relieved She-Ra’s swansong didn’t suck like Game of Throne’s & Penny Dreadful’s! Noelle Stevenson’s reimagined She-Ra & The Princesses Of Power truly brings honor to Grayskull!

6 thoughts on “Does She-Ra & The Princesses Of Power’s Fifth Season Win In The End?”