Hey, it’s a comic book (not live action) custom! I haven’t had one here since Tombstone? I repaint most of my toys, but often just for shading & touch-ups. I was originally going to leave the Kyle Rayner I got for Christmas alone, but it’s not like I had anything better to do during quarantine. (My unfinished second novel weeps.) This fella was simple but turned out so well I thought I might as well share.

“I will smack you with my purse!”

In one of its last DC series, Mattel finally produced classic Kyle Rayner. Well it’s technically Rebirth Rayner, but that just means his chest emblem is different. Close enough! His legs are really long which makes his arms seem a bit short. Although he can do better flying poses than earlier Mattel efforts, his neck & chest don’t have as much backward movement as I’d prefer. He can look down upon other toys if you rig him up so he hovers. His blue comic-style hair highlights are spiffy. 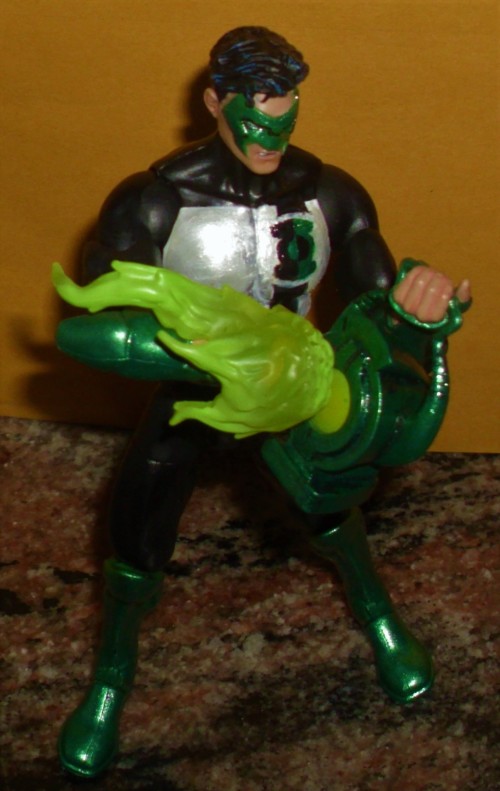 How’d the evil doppelgangers snap up the name Power Ring first while the heroes are named for their chargers?

Sprucing him up was even easier than Shuri since I didn’t sculpt anything. Luckily I hadn’t tried tried to customize Mattel’s earlier attempt. Procrastination pays off again! I repainted all the dull green with metallic green. (I never realized I’d get so much use out of it when I bought that paint specifically for the Riddler.) Now it looks like armor evoking a lantern. (I’m still not sure why he gave himself gauntlets that let heat escape his wrists, but it makes for a more unique visual.) There’s a bit of shading flesh & black for contrast. I thought that’s where I’d stop, but I couldn’t resist giving him the original badge too. It makes so much difference! You can tell Kyle is a graphic designer because that mirrored bichromatic logo pops! It looks more impressive not constrained by a circle. His “bib,” which evokes Star Trek: The Next Generation to me, was touched up with pearlescent white. Now he really looks like Darryl Banks art!

Sadly he doesn’t come with any cool constructs. He energy effect is a better Necroplasm accessory than Spawn ever got though. At least it’s not opaque like Jessica Cruz’s. The energy flame & his unique power battery are cool, but I wish they weren’t his only accessories. At least they don’t have “CHINA” stamped on them. The paint scrapes off the battery’s handle if I remove it even with varnish.

“This plunger-trigger may be a design flaw.”

I’d like the sword construct that came with Kyle’s ugly costume, but nobody’s selling theirs loose. Do any of the constructs from the tiny Green Lantern movie line fit? Supposedly they fit 6″ Mattel figures, but I don’t want to hunt them down only to discover Kyle’s an exception. The disk shooter from the Total Justice figure & Parallax’s shield will fit gingerly. (Rather than Fractal Tech-Gear, I decided Kyle’s snap-on armor was just generated by his ring.) Polaris’s Kirby krackle waves fit more securely on him than her, but the clips were stretched out further when I returned them.

Custom Kyle is tricky to photograph with his shiny paint. Perhaps someday I’ll acquire a light box with a ring light, but today is not that day. Who’s investing in basic equipment in this economy? Are these photos doing a disservice to a great custom or are they disguising an awful one? You decide!

You might’ve noticed I repainted Kilowog’s (his name kind of sounds like a hate crime) gloves DCAU style. I agree with Ryan Reynolds that white gloves look out of place on a Green Lantern. Now that poozer is the only member of my meager GLC without metallic green in their uniform. This was oddly true for his movie toy too. If there’s two GL’s per sector, why aren’t they more effective at thwarting space crime without always calling in an Earther?

I’m glad Mattel finally got around to making this Kyle as McFarlane sadly looks like he won’t. Todd’s approach to the license is frustrating. He kicked off with examples of DCTV, DCAU, & even some non-Batman comic book characters. It was eclectic but had enough variety to be intriguing. Now aside from WW84 (he snubbed Cheetah though, unless she’s scheduled for DVD release time ), he’s only doing Bat-centric stuff. Tough luck to anyone who expected him to finish off those subsets. If you want something besides Batman, too bad. He’s still not making the missing Gotham characters though. We’ll never get Ambush Bug at this rate.

Kyle Rayner is Latino (specifically Mexican-Irish American), so Oscar “the Internet’s boyfriend” Isaac would be a good pick for him as he’s a self-described space slut. This costume test of Simu Liu convinced me he’d also have the right laidback charisma for Kyle regardless of ethnicity. (I originally thought Kyle was intended to be Indian because he was sometimes a darker pink than others & coloring was still not that advanced in the 90’s.) It feels like Kyle would’ve gotten along swimmingly with Jaime “Blue Beetle” Reyes, but I don’t believe they’ve met.

Kyle Rayner is my favorite Green Lantern because he’s an artist first & foremost. Not only did he redesign the GL uniform into something uniquely slick, he also makes very creative energy constructs. Rayner’s ring was upgraded to be immune to yellow to protect him from his own Ticonderoga pencils. Since Parallax had wiped out the Green Lantern Corps, there wasn’t concern about Kyle being a fascist space cop. (I had this blog ready weeks in advance & was concerned the timing might be misconstrued as supporting police brutality. How crazy is the world where saying police shouldn’t kill unarmed black people & get away with it is revolutionary? Black lives matter! Please wear PPE to protests during this pandemic as these events are not conducive to social distancing.) Too bad so many of those changes got rolled back by Geoff Johns. It seems like half of the stories since GL Rebirth have been about mopping up the self-appointed Guardians’ abominable decisions, so the universe would’ve been better off. Ron Marz’s Captain Crabmask disn’t have poppycock about willpower being an emotion either.

Much like Wally West as The Flash & Danny Ketch as Ghost Rider, Kyle Rayner reinvigorated the concept of Green Lantern. Likewise his predecessor returned & absorbed his innovations. (What’s this trope called?) Then new inheritors of the mantle debuted to further push him out of the limelight. At least Kyle hasn’t been killed off or vilified to the same extent as Wally & Danny. (He’ll unfortunately be forever associated with women in refrigerators though. Alex Dewitt did get a Spider-Gwen moment in a confusingly titled one-shot.)

Kyle Rayner would be a fun guest star on Legends of Tomorrow. Possibly the series would prefer to uphold the tradition of taking the piss out of Guy Gardner. Best Canary could do the one-punch honors. He’s not even the GL worthiest of disrespect. Hal Jordan & head trauma is my OTP because he’s got the IQ of guacamole. (Larfleeze shouldn’t been conflated with Trump. The Orange Lantern deserves better for slicing off Hal’s hand.) Of course the Green Lantern most likely to guest star would be Diggle, who became John Stewart in a roundabout way. Hypothetically LOT could feature every Earthling ring-slinger by making them from separate time periods. It’s already shown Alan Scott’s son, Obsidian, was a JSA member. Who knows if Kyle will pop up in the Green Lantern Corps that may be a movie, an HBO Max (It could also resurrect The OA as a Green Lantern prequel.) show, or both?

Much like Ruby Rose exiting Batwoman, Hartley Sawyer being fired from The Flash would be easier to work into the narrative if it was able to finish its season. Since shapeshifting is one of Elongated Man’s established powers, however, recasting him should be less of an issue than usual. What if Cory Michael Smith was available for replacement Ralph Dibny? If Caroline Dries ran The Flash instead of Eric Wallace, she’d replace Ralph with a completely original character, Lamprey O’Shaughnessy.

Something not topical for next week?