After reviewing one of the best TV shows of last year, this week I did the thing I said I couldn’t easily do! 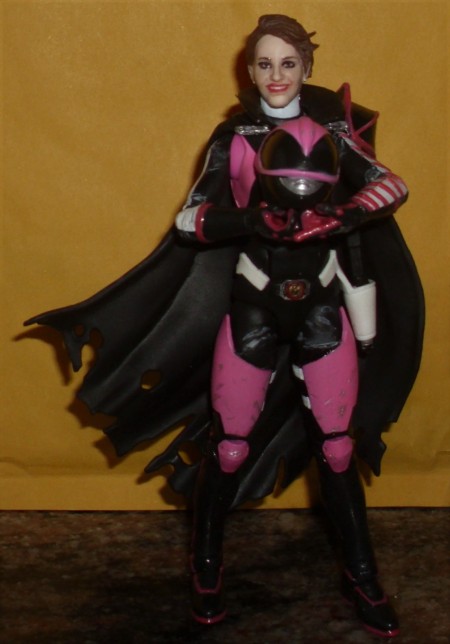 Surprise! Kimberly Hart was the Ranger Slayer all along! I bet your monocle flew clear across the room!

Ranger Slayer sold out the day Hasbro Pulse put her up for pre-order despite not including the necessary unmasked head. I was too late & scrambled to order elsewhere fearing this trend would extend to all merchants. This was before lockdown went into effect, so it was fortuitous I didn’t wait to take my chances hunting her in stores. I bought the last remaining Kimberly Hart head from the Pink Ranger figure off eBay even though I was overcharged on shipping. So I’ve had a grinning Amy Jo Johnson head floating around in a lovely Lightning Collection box for months eagerly awaiting a host body to attach to. 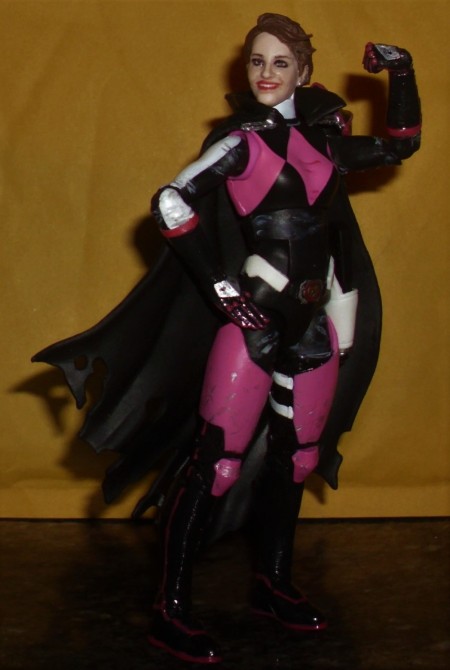 The Kimberly Hart head was controversial among collectors. Many thought it was too exaggerated to do justice to Amy Jo Johnson. On the other paw, I personally love how expressive it is! Thanks to Hasbro’s Photo Real faces, I can instantly tell who it is without an accompanying Power Rangers suit. It evokes how upbeat Kim was, & it also works for a modern Ms. Johnson since she appears to have renounced aging. I’m wondering if whiny fans played a part in the unmasked head being nixed for this version? Lord Drakkon includes a David Jason Frank head afterall. Did Johnson’s likeness rights just not cover alternate Kim Harts created by BOOM! Studios? 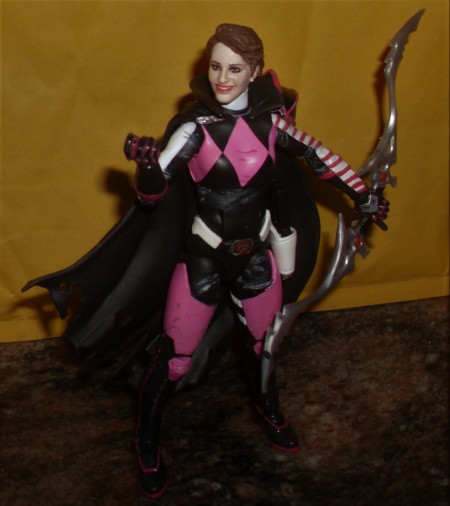 Kim’s favorite X-Man is Gambit, & her favorite band is Blackpink.

Kimberly’s head fit perfectly on Ranger Slayer’s body without any modifications, which make it more egregious one wasn’t included. Her cape is held on snugly by its sculpt, so Kim’s long hair greatly stretched apart the closure. This convinced me to give Kim a haircut. I figured I could always glue it back on if I bungled it.

Much like Carol’s Danvers’s haircut after becoming Captain Marvel, each picture of Kim’s Ranger Slayer hair looks different. The page where she’s unmasked has her shock of hair opposite this toy’s part to emphasize Mirror Universe evil with with shorn sides. Later images had her hair jut forward down the center. Another gave her a distinct wavy Flapper bob. These discrepancies were an excellent excuse not to worry that much about accuracy! 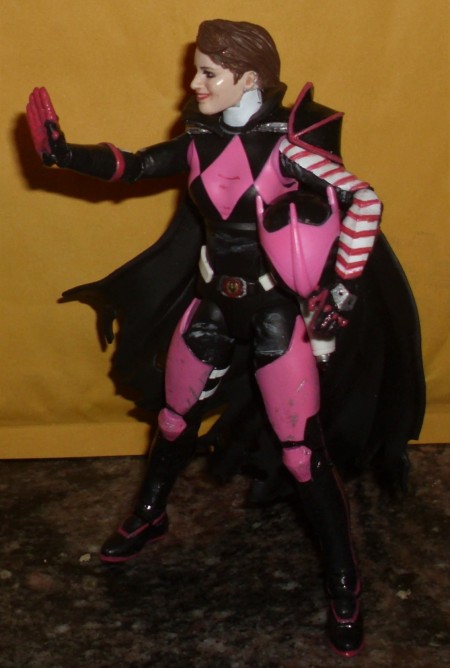 “Talk to the hand, cause my post-apocalyptic makeover ain’t listening!”

I began by slicing off Kim’s hair at the base of her skull. It looked more practical but a bit too matronly. I gingerly sliced apart two strands from the front & folded them backwards & up. This tiny alteration put her chic coif on fleek! I could’ve done more, but for once I quit while I was ahead. It’s kind of like fellow archer Echo’s season seven crop on The 100 except still parted backwards. (Why is there no “The” in Ice Nation though?)

I gave her black rimmed eyes to enhance the goth-punk aesthetic. And you thought the Amy Jo Johnson head looked deranged before. Now she’s really hopped up on goofballs! To maintain cognitive dissonance, I went with pink lipstick over black. Her additional earrings were created with impasto. In addition to the no-show noggin, many paint apps were absent. Her left glove cuff, leg straps, backhand armor, knuckles, palms, armor scuffs, & shoe piping were unpainted. Her piping is supposed to just be on the shoes, but the sculpt lines up with the leg seam that stops at her thigh armor. So I continued the color upwards & gave her pink soles too. I made her gloves & boots glossy because it’s go-go Power Rangers, not cry-cry. I threw in some shading as well. 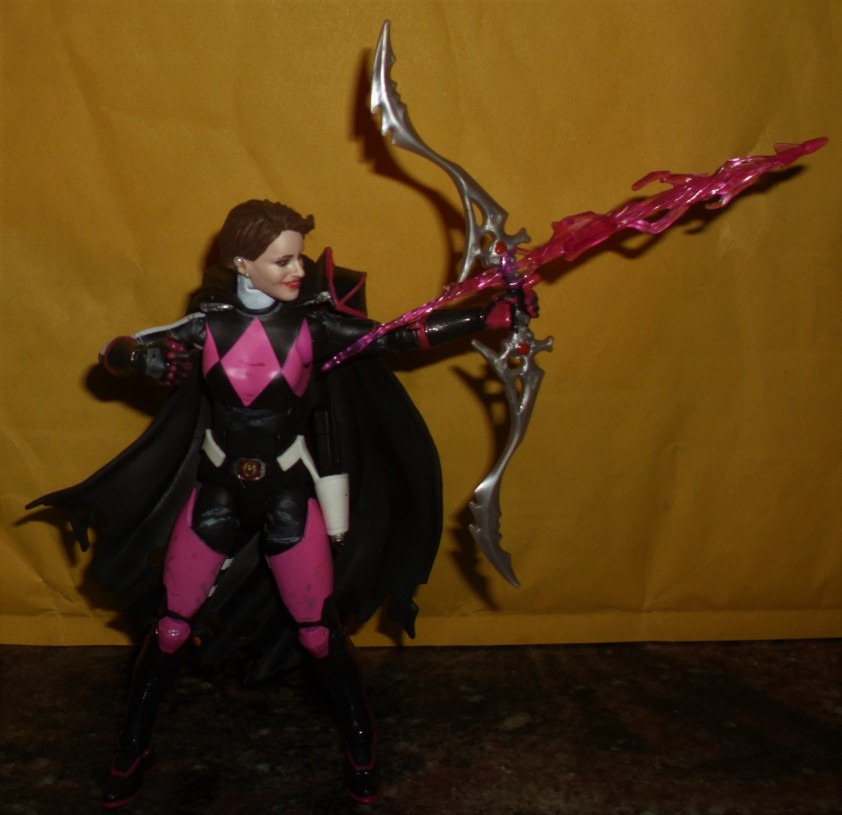 I normally string my action figures’ bows when they aren’t, but there doesn’t seem to be practical anchor points on this Bow of Darkness. Art cheats reality again! It looks like it’d function more effectively as a bladed weapon anyway. The clips for her arrows are a clever idea. Archery arm guards are supposed to protect inner arms from being sliced by bowstrings, so the armor on the outside of her left arm isn’t as useful as it could be. Aside from asymmetry equals evil, why not wear it on both sleeves? 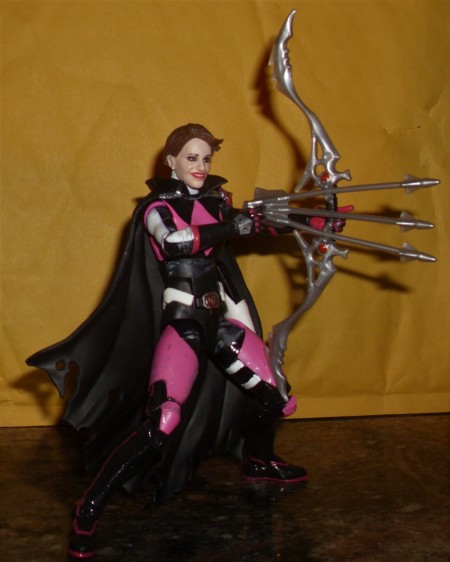 Whereas Marvel Legends & Star Wars Black boxes have a couple sentences of vague description, the Power Rangers Lightning Collection boxes have no text explaining who any of the characters are. Hasbro just expects all customers are hardcore Super Sentai fans. As this outfit’s never been on the shows though, you’d need to be a comics or video game nerd too. (Make Chun-Li as the Blazing Phoenix Power Ranger next!) Lord Drakkon used mind control to turn Kim evil, so she’s probably restored to good by now. (This also happened in the awkwardly named Turbo: A Power Rangers Movie.)

“I want you … to slay Power Rangers!”

Despite not being an avid Mighty Morphin’ Power Rangers acolyte, Rangers Slayer’s comic design by Dan Mora is too cool to pass up. It has the overwhelming black typical of evil doppelgangers, but there’s still plenty of bubblegum pink to pop against it. Since modern sensibilities favor black over bright colors, casual audiences would also accept this as the standard heroic suit in a reboot. Although she still bears the Pterodactyl on her helmet, Kim now pilots a kitbashed Gravezord. Contrasting armored additions take it further. It’s the tattered cloak with collar & pauldron that definitely say villainess. Her cape adds a Gatchaman flair. Why isn’t Kim the boss if she wears the cape? 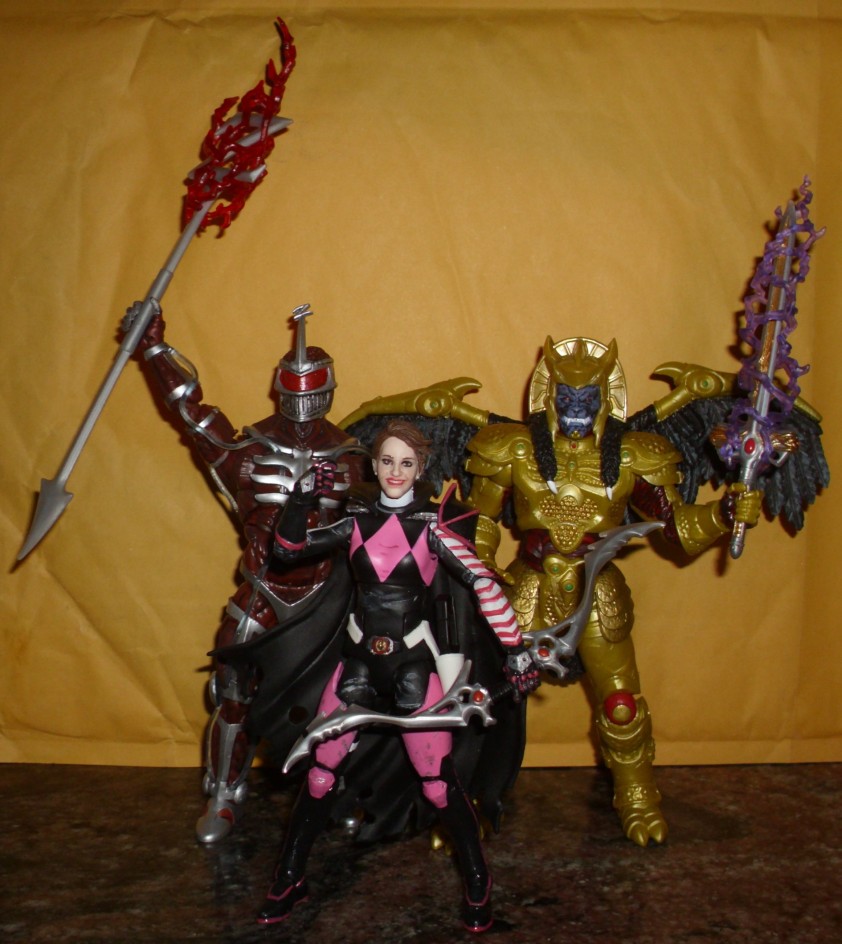 After much research, I still think romantic Goldar, whose sword resembles The Sword of Omens, is some sort of winged doggie instead of a griffin.

The Lightning Collection needs more monsters! The Power Rangers were very concerned about protecting Angel Grove’s abandoned warehouse district even though it was restored miraculously fast after each weekly monster demolition. It’s also an odd name considering lightning appeared to be incidental to Morphin’ Time unlike the transformation of SHAZAM! 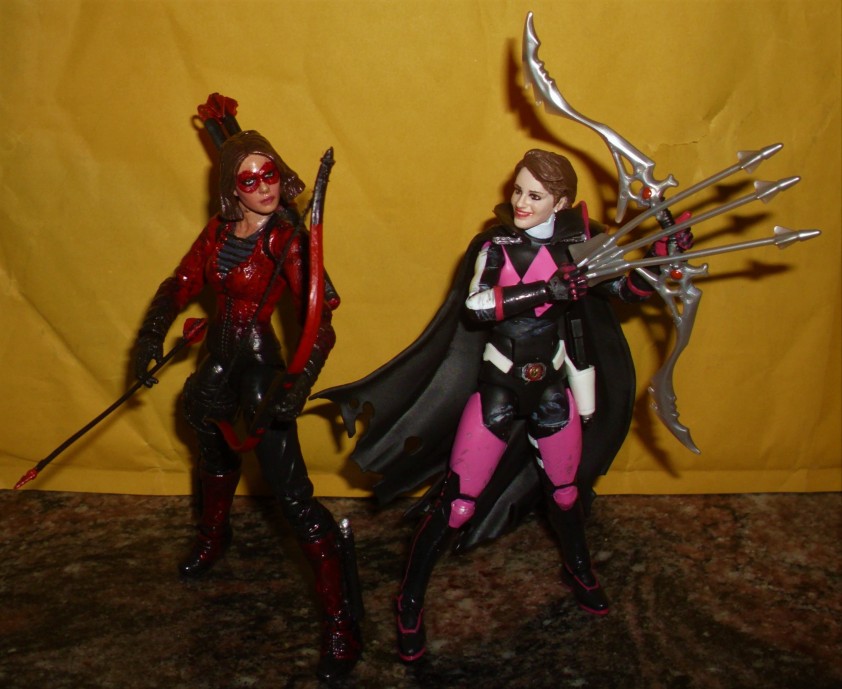 Although they’re made by the same company, all of Hasbro’s 6″ lines are slightly different scales. It may be excusable for comic book characters (despite them have defined heights in official handbooks), but shouldn’t real life humans all be the same 1:12 scale regardless of design team? Kerri Russell is taller than Amy Jo Johnson, yet Zorii Bliss in helmet & wedge heels is shorter than helmetless Ranger Slayer in flats? 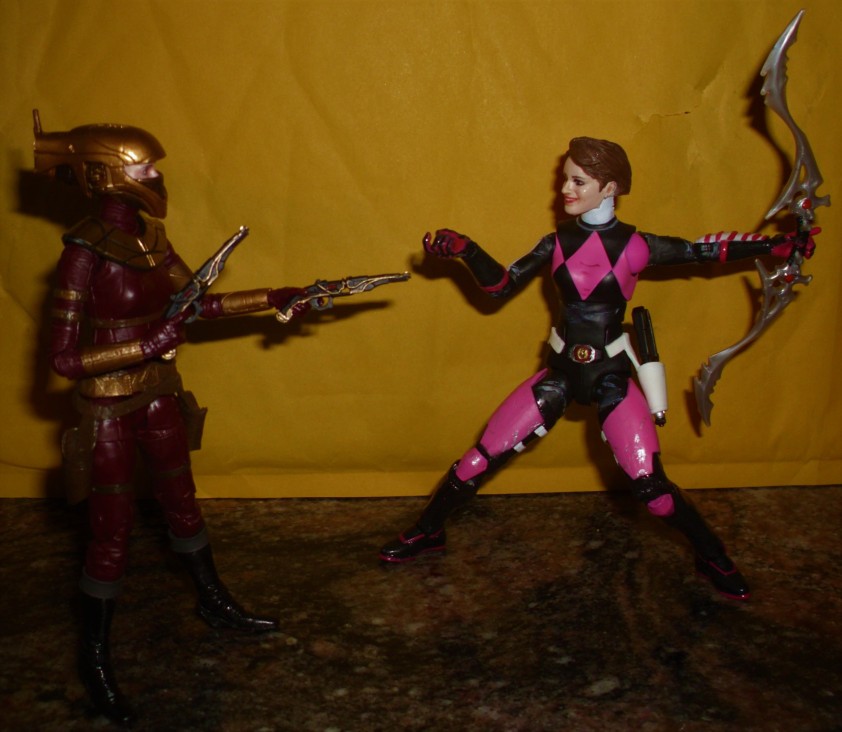 I presume this is what transpired on a typical episode of Felicity.

Despite missing the necessary head, Ranger Slayer comes equipped with lots of articulation & accessories. (The swivel above her ankle is tad redundant.) She’s so fun to pose that I didn’t ration out my amateur photos for future blogs! She makes me disappointed in Hasbro’s Marvel & Star Wars series I care about more! Doth I protest too much that I’m ill-versed in Power Rangers or just the right amount? 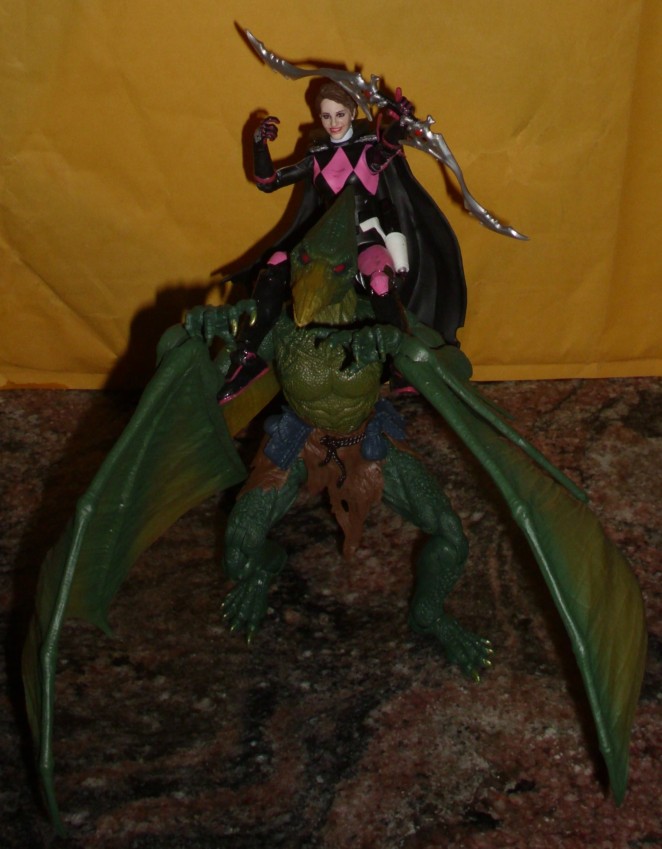 The Extraordinary Adventures of Adèle Blanc-Sec

3 thoughts on “Ranger Slayer Danger Ahead!”