Sometimes I write blogs for spite! I’m not sure if my faith in humanity should be restored by the minimal views. Now we’re back to one of my rambling blogs that aren’t tied in to recent media events. The topic is X-Men (Remind me to do an annual cat post.), handily divided into toys, film/TV, & comic books. 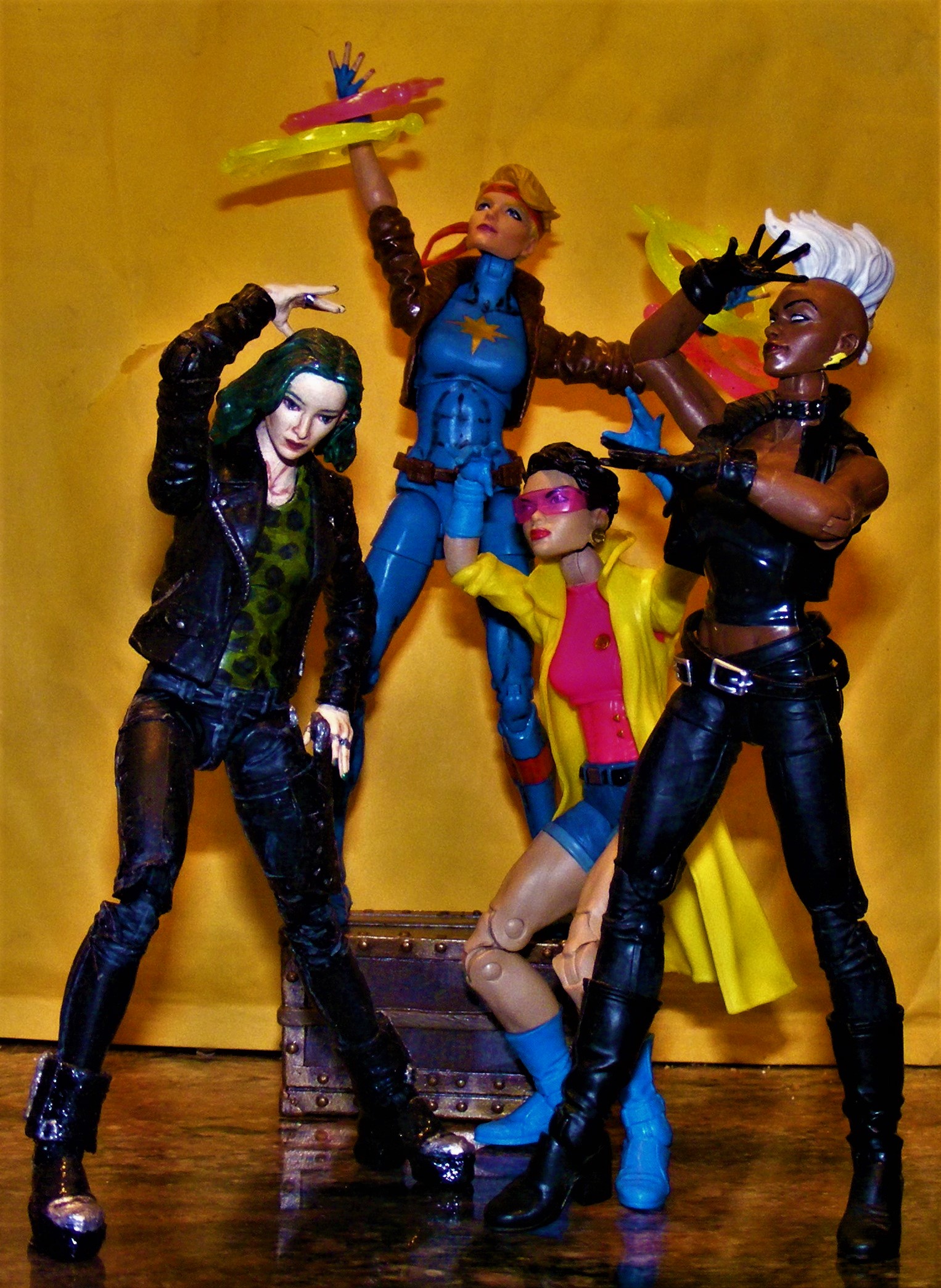 This is how the youths comport themselves in music halls nowadays.

I’m surprised we haven’t gotten a Marvel Legends Vertigo yet since she could be almost a full repaint.

Are the 2-pack Storm & Pyro slightly comics inaccurate because they’re really based off the arcade game?

Domino’s asymmetrical headgear looks wrong even if there may be one issue it’s accurate to.

This Excalibur set makes me react like Batman. Also Shadowcat’s hair is wrong. Her head looks like it’d work well for a Dreamer custom though. Did Captain Braitain remove his chinguard when he grew that beard?

I didn’t like HOX/POX, so a wave based on it leaves me cold. I didn’t even remember the future Tri-Sentinel. Moira MacTaggert should’ve been made in her yellow jumpsuit.

It’s ironic because Negasonic Teenage Warhead did get an action figure! Technically the comic version hasn’t gotten an action figure, even after she was revamped to match her movie counterpart more.

Bang bracelets together in case of emergency?

Who ordered the hideous Blackbird Transformer?

The only The New Mutants Lockheed puppet available is in some hard to acquire promo box. Even Etsy let me down.

The sad head with the SDCC exclusive 12″ cartoon Wolverine is too exaggerated to match the scene.

Mezco can add superfluous details yet can’t get the stripes on Wolverines’ sides right?

Imagine a line of X-Men statues specifically not including Sentinels or the Danger Room!

The Disney Store finally has X-Men merch. This figures are weirdly off-model.

The Queen’s Gambit is undoubtedly Anya Joy-Taylor’s finest performance since The New Mutants. You’d expect it to star Emma Frost & Remy LeBeau rather than Illyana Rasputin. Too bad it had a blatantly anachronistic spinner rack selection. Beth Harmon has grown too powerful & must be excorcized from our reality! She does for chess what Abner Krill did for tiddlywinks!

I prefer the real Frasier.

Deadpool 2 could’ve featured a slightly bigger costume change than just the back of his gloves. It would’ve been an innocuous redesign, but if it ain’t broke…

Will Morena Baccarin finally be blue in Deadpool 3?

Deadpool’s MCU debut is a commercial.

Pete Wentz lost his chance to play Bolt to Dominic Monghan while they were in a skit together.

Dan Stevens would be going from Xavier’s son to his boyfriend if rumors of him being the MCU Magneto pan out.

After binging Banshee, I won’t accept anyone but Ulrich Thomsen as Magneto.

Joanna Cargill ought to be played by Jade Cargill.

If he can nail the Quebecois accent, Dan Levy as Northstar could work.

Random should be played by Vin Diesel.

Emma Stone stars in Emma Frost about a strict headmistress who kills a pony once she discovers their horrifying anatomical secret. Then she has Butter Rum’s hide tanned & made into a corset.

I have never seen John Mulaney in a trenchcoat in a room with Multiple Man despite the fact that there can be up to forty of him simultaneously.

Imperfect X-Casting is a great game show concept. “What chore did Tom Sawyer trick Ben Rogers into doing for him?” THEY WHITEWASHED SUNSPOT. TWICE! It boggles my mind that Logan had Richard E. Grant as a mad geneticist but not Mr. Sinister.

This is how Wolfsbane would’ve turned out if she was American.

You can buy animated series pants.

The comic continuation of the X-Men cartoon rebooted its universe amidst Marvel Vs. DC.

Why did X-Men: Evolution bother upgrading Mystique’s default form to buff & scaly if it was just for one scene?

The Generation-X TV movie isn’t on Disney+, so it’s a good thing I taped it onto VHS to continue not watching it. How weird is it that this still has the best live action White Queen?

This is why Quicksilver & Scarlet Witch aren’t Jewish in the MCU.

At this point I’m thinking we’ll get X-movies made by Marvel Studios but they’ll still be a different universe than the MCU. Unless they do a multiversal Secret Wars movie to retcon in that mutants have always been around.

If the rumor that Scarlet Witch encounters a mutant from a Fox universe (The continuity is so shoddy there can’t just be one!) in Doctor Strange In The Multiverse Of Madness, it had better be The Gifted’s Polaris! (Lorna Dane is the mutant most commonly mistaken for Au/Ra.) Too bad they already blew Evan Peters on a limp boner joke.

Polaris makes it rain rebar! (Insert rebar with the power of your imagination.)

Do the illustrators of X-titles get paid less now that they’re incorporating so many text & infographic  pages?

The Pitiful Human-Lizard’s Jason Loo got his Multiple Man short printed in X-Corp #3!

Dagon The Avenger looks like the Player 2 version of Eric The Red.

X-Men was the USA’s first “manga?”

Lady Deathstrike’s attempt to erase the fifth turtle from the timestream has been proven ineffective. She’s just gonna ignore Nighthawk.

The Punisher is merely a poor man’s X-Cutioner.

Xavier “Krakoa has no prisons. Sabretooth is in an oubliette.”

Kwannon “I called myself Revanche! I know what an oubliette is!”

Krakoa was founded as a tax haven.

What if Cyclops’s eye-beams were really I-beams?

This is how Cyclops’s powers work.

Reinterpret Greek myths in a way that Scott Lang washes up on Krakoa & jabs a burning stick into Scott Summers’s eye.

Emma Frost does have parallels with Jack O’ Diamonds.

Stan Lee was insistent that Toad not have a prehensile tongue because jumping really well was good enough for his frog boy.

The Kool-Aid Man must actually be the unstoppable Juggernaut.

“An autistic mutant? Nah, M is just two kids in a trenchcoat.”

Why doesn’t Nightcrawler’s butt get as much adoration as Nightwing’s?

Shadowcat is one of the coolest codenames. When is Captain Kitty Pryde gonna get over herself & resume using it? It’s a more apt codename for Kurt Wagner than her.

If Shadowcat only dates Peters (Colossus, Pete Wisdom, Ultimate Spider-Man, Star-Lord) then Paste Pot Pete, Quicksilver, & Petra (who name really is Petra) would qualify for her collection. Does Dominic “Avalanche” Petros count? They had a thing in Evolution where his name was Alvers, Lance.

Guardian/Vindicator & Northstar/Aurora would make slick t-shirts, yet Marvel never produced them? Why do they hate Alpha Flight?

Jean Grey should’ve gotten a cool new costume on Krakoa instead of reverting to her second worst one. Why is Marvel obsessed with calling Jean Grey “Marvel Girl” & making her wear that fugly miniskirt? Ya burnt, Jean!

Archangel doesn’t get a flying horse.

Golden Kamuy highlights why being short is a vital part of Wolverine’s character. Logan can always be drawn shorter.

Izmailovo got a Wolverine statue before Fort McMurray?

Cable got his mom’s twin’s powers.

To his horror, Iceman learns of The Welsh!

Hank McCoy should give himself a less generic name like The Bluerilla. Why didn’t Beast wear an Avengers logo belt buckle when he was on the team?

All visitors must walk beneath a pole in Magik’s dimension.

It feels wrong that Dazzler was based on Bo Derek instead of Olivia Newton John. She was originally supposed to be Grace Jones.

No more mutants = No more springs!

“Feeling under the weather” is a silly expression because only Ororo Munroe is above it.

Magneto has mastery over The Magnetic Fields, particularly Stephin Merrit.

Magneto has his own logo font that Marvel refuses to use.

Magneto got a solid (but not superlative) death at the start of New X-Men when Marvel was lying about its new “dead means dead” rule. Then Morrison had to go ruin two characters with a single stroke!

This is the best Jubilee tattoo.

Polaris to Batman, whom doesn’t do that.

Get Lorna’s look by bleaching your hair right before jumping into a chlorinated pool!

I’m surprised the Danger Room isn’t used as creatively as a Holodeck more often in the comics. It ought be renamed “The Child Abuse-atorium.” Kids these days are a bunch of whiny snowflakes who can’t handle their teachers shooting lasers at them to toughen ’em up!

Why does Havok never get as much love as Indiana Jones & Lara Croft for being a mutie archaeologist?

Has Fantomex been wearing a really long vest instead of a trenchcoat this whole time?

Do you think Chameleon is flattered the Hellfire Club goons’ mask copied his face?

I hate that I know what this is referencing.

Mystique & Poison Ivy would be the best duo!

Was it Mystique in disguise or just bad writing? Who can say?

Next week I’ll be pulling double duty frantically trying to review Shang-Chi & Legends Of Tomorrow in a somewhat punctual fashion.