We bid you welcome to The Wages Of Cinema collaboreview for Doctor Strange In The Multiverse Of Madness! Do you need to see WandaVision before Dr. Strange 2? If you don’t have Disney+ like our control group, Andrew, scope out this review first. I’m dropping additional thoughts on the series afterwards anyway.

Is there even a point to this now that Everything Everywhere All At Once exists? Its international titles are on point. I would’ve gone with Dr. Strangemom, Or How I Stopped Worrying & Learned To Love The Multiverse. I’m not going to argue with Jamie Lee Curtis!

Can we live in the altverse where The CW gives Legends Of Tomorrow the final season it deserves? Is this sequel actually about Dr. Strange, or is he merely filler betwixt multiverse cameos? Does DSITMOM distract from thinking about Natalie Portman’s arms in Thor: Love & Thunder? Grab a popcorn cube & prepare for SPOILERS! Don’t even read the tags if you want to be surprised by cameos.

END_OF_DOCUMENT_TOKEN_TO_BE_REPLACED

The making of the second third Spider-Man movie seemed more chaotic than usual. There’s been so many leaks about this movie before press screenings even happened. Neither they nor the trailers have gotten me enthused about seeing this. Why do we need this when Into The Spider-Verse already exists? (Across The Spider-Verse looks keen! Is Hailee Steinfeld getting typecast?)

“We already have Spider-Man at home.”

No Way Home at home is Into The Spider-Verse. There is much rejoicing.

One downside to superhero movies finally catching on with the public is that The ‘Net is determined to spoil anything that may bring firsthand joy. Legions of Spider-Fans have been extra rabid about this one. So The Wages Of Cinema SPOILS this movie for you to perpetuate the web of abuse.

END_OF_DOCUMENT_TOKEN_TO_BE_REPLACED

Unlike Uatu, I have vowed to interfere with your viewing enjoyment of assorted Marvel adaptations! Disney’s first official MCU cartoon, “What If…?”, is simultaneously canon & irrelevant to the MCU because of they’ve officially admitted there’s a multiverse. Every Marvel adaptation is now retroactively part of the Marvel Cinematic Universe, completionists!

The series premiere is the most boring, yet I spent the most words discussing it. It acclimates viewers to the concept as subsequent episodes become more experimental. It doesn’t do anything as provocative as Steve Rogers professing blind patriotism is bad. These brisk episodes expect you to conversant with the MCU, which shouldn’t be an issue if you’re streaming on Disney+. “What if … Phil Coulson lived?” is available to stream now too. Some of the minutia has been fudged in these altverses, but it’s not like the movieverse continuity is airtight. At times like those it makes me wish the series wasn’t beholden to the MCU at all. What if … you read below for SPOLIERS for the speculative fiction that Uatu & I watched? What if … this phrase wasn’t at all overused in this post? 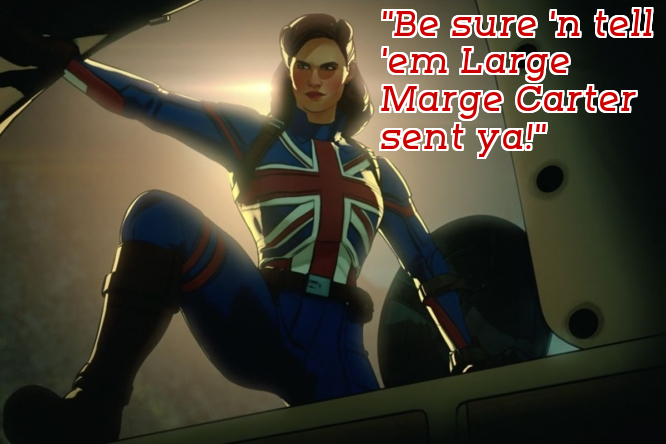 Peggy is short for Margaret because is rhymes with Meggy?

END_OF_DOCUMENT_TOKEN_TO_BE_REPLACED

Shang-Chi & The Legend Of The Ten Rings is a great title I would’ve expected of a sequel. Fred Van Lente was asked to use Shang-Chi in Wolverine: First Class so Marvel’s trademark wouldn’t lapse. Then they don’t bother using Master Of Kung Fu in his movie title. I agree that mastering kung fu isn’t the greatest selling point in a universe of superhumans though. If he’s mastered kung fu, why isn’t Shang-Chi’s supranym Kung-Fu-Mmaster? (DC has Judomaster.) The Wages Of Cinema will now SPOIL what happens beyond the title while its newer trailers spoil the climax to a crazy degree! Is Shang-Chi your guy when The Ten Rings are nigh? (If you’re not ready for that, might I interest you in some X-Men rants?)

END_OF_DOCUMENT_TOKEN_TO_BE_REPLACED

People are freaking out about the trailer for the second third Spider-Man like it’s the second coming of The Snyder Cut. I’m not enthused by No Way Home, but I’ll write about it since that’s what the rabid public wants. By the time I publish this they’ll have moved on to something else. (I’ll be chagrined if it still gets more views than the Superman & Lois season one wrap-up.) Unlike reputable news outlets, punctuality is our #1 dream. That’s okay because I really wanted to talk more about The Suicide Squad. The new memes I’ve made since will surely be stale now too. SPOILERS for that underperforming movie leaving HBO Max soon & a trailer that you’ve probably had shoved in your face even if tried dodging it below! At least this one’s short.

END_OF_DOCUMENT_TOKEN_TO_BE_REPLACED

D+ means Disney used to have a higher average before absorbing Fox. Wand Division is the new math. WandaVision was supposed to be bumped it forward to 2020 to make a perfect 20/20 vision joke. Although it completed filming before the pandemic production pauses, unlike Falcon & Winter Soldier, it then got pushed back to its original 2021 slot so it wouldn’t compete with The Mandalorian’s second season. Viewers are supposed to be excited for bona fide Marvel Cinematic Universe characters appearing on a televison show instead of a movie, as if Phil Coulson, Peggy Carter, Nick Fury, Maria Hill, Sif, Jasper Sitwell, Edwin Jarvis, Gideon Malick, Dr. List, & the Howling Commandos didn’t already on Agents of SHIELD & Peggy Carter. Remember when SHIELD premiered & people were mad they’d have to watch one series on free network television to fully understand the Marvel movies they paid for? Now that there’s a bunch of more directly influential series that behind a subscription service paywall, fans are excited?

Marvel Studios’ movies are sometimes described as television in cinemas since they link to form a larger story. This time it could argued that MCU’s lucky thirteenth television series is a long movie split into weekly installments. (So are these Disney+ Marvel series going to be event series? I don’t feel like making new tags for them if they’re each one & done. So this’ll just get the standard “Avengers” & like it. If renewed, we can consider making unique tags.) SPOILER warning for nine episodes of the most popular television series of the moment. You really deserve a prize if you’d made it unspoiled this far.

Wanda Maximoff defies her name by being a witch who doesn’t wield a wand. Her Zatanna cosplay was actually scarlet. END_OF_DOCUMENT_TOKEN_TO_BE_REPLACED

After last week’s commissioned deep dive into Stormfront the proverbial milkshake duck, I figured it’s time to clear out some of the Marvel content cluttering my drafts. I won’t be finished editing my X Of Swords review until nobody cares, so this is light on X-Men content. It does have a surfeit of pre-Christmas action figure photos if that’s your bag. (I will regret this if Santa only delivers coal this year.) After the MCU news musings not involving She-Hulk, my comic book thoughts are separated by superfluous tildes!

“Now I have The Phoenix Force! Ho ho ho!”

END_OF_DOCUMENT_TOKEN_TO_BE_REPLACED

Last time I said I’d see if NYCC 2020 was anything to write home about. As it turns out: No! Much like SDCC, this year’s New York Comic Con went virtual as a self-proclaimed “Metaverse.” The new NYCC emails were too busy. I thought SDCC had the better panels this year. Helstrom premiered, & not a single damn was given. So instead of blogging last week, I just watched the delightful third season of Kipo & The Age Of Wonderbeasts! (Should I write a whole blog on that, or do you already know it’s great?)

So this week brings another custom of a mid-tier character. There’s finally a Marvel Legends of Juggernaut’s “hetero-life-mate!” (Once you get into fanfic, there’s an even bigger question mark over that dubious descriptor. Also consider Avalanche & Pyro.) Thanks to Deadpool 2 for finally raising Black Tom Cassidy’s profile sufficiently for Hasbro to take action!

END_OF_DOCUMENT_TOKEN_TO_BE_REPLACED

I was going to write an esoteric blog about Cats (the poems, musical, & movie), but that’s become way too popular a topic what with the dearth of new media. So until that becomes obscure again, I’ve picked a different feline adjacent topic. I’ll cut off my nose to spite my face to keep this blog a novel destination for The Time Being, which is oddly not a Doctor Who character.

Behold the best Disney Princess! Despite being one of the breakout characters of Black Panther, Princess Shuri didn’t get a Marvel Legends figure in either of that movie’s two assortments. When it finally made her in conjunction with the last Avengers movie she was barely in, Hasbro went with drab Avengers: Endgame colors over the bright BP ones shown on the box. This was a mistake! I customized her like her big brother! It went relatively quickly. It was even easier than upgrading MCU Elektra.

END_OF_DOCUMENT_TOKEN_TO_BE_REPLACED

HUZAH! It’s the fiftieth anniversary of San Diego Comic Convention! I didn’t attend, thanks for asking. (I took last week off anyway after reviewing Stranger Things 3.) Did you? Here is my armchair event coverage (loosely arranged by DC, Marvel, & miscellaneous mess) that’s rapidly losing topicality! Wait, shouldn’t it be celebrating it golden anniversary next year?