Daredevil, Luke Cage, Iron Fist, The Defenders, & The Punisher have all been cancelled. Jessica Jones is the last Defender standing. Well her series is done after season three, but it’s the last of Marvel’s Netflix shows to be released. Although I refuse to let go of Kilgrave not being purple, Jessica Jones season one was great. I liked season two more than most thanks to Janet McTeer’s superlative performance as Alissa Jones. Netflix hasn’t released any fun stills to riff on, so I’m falling back on my own natural resource of action figure photos. (Marvel & Netflix care about it so little they didn’t even make any mock covers for it like last season.) Now let’s pour one out with SPOILERS for Jessica Jones season three! Will it finally pay off Chekov’s Stilt-Man?

Had this deleted scene been set after Endgame, Double J could’ve finagled a European vacation from Triple J.

END_OF_DOCUMENT_TOKEN_TO_BE_REPLACED

Now that I’ve finished slagging off Doctor Who, I resume my habit of having no discernible topic! There’s a mishmash of potentially spoilery Punisher, Gotham, & Aquaman musings below. But first let’s chat about Mysterio again because the time is finally ripe!

END_OF_DOCUMENT_TOKEN_TO_BE_REPLACED

December dawns with the demise of Daredevil! Hot on the heels of the cancellations of Luke Cage & Iron Fist, Netflix destroyed the writers’ room’s dreams of a fourth season. Now I’m extra mad Bullseye didn’t have his own costume & Stilt-Man’s foreshadowing never came to fruition! (Tumblr is probably dying of self-inflicted wounds too, which reassures me that being too lazy to make a Tumblr was a wise move.) So Jessica Jones season three & Punisher season two look to be the end of the line for this hallway-battling venture, unless Netflix mercifully greenlights another season of The Defenders  to tie up all the loose ends. Let’s belabor this point whilst awaiting coming attractions for the next Avengers! At least Captain Marvel marketing is punctual.

END_OF_DOCUMENT_TOKEN_TO_BE_REPLACED

I successfully didn’t watch Arrow’s season seven premiere! I did see Daredevil season three. Remember when Netflix used to space these out? Dare you read down into SPOILERS? Please do or I wrote this for nothing. 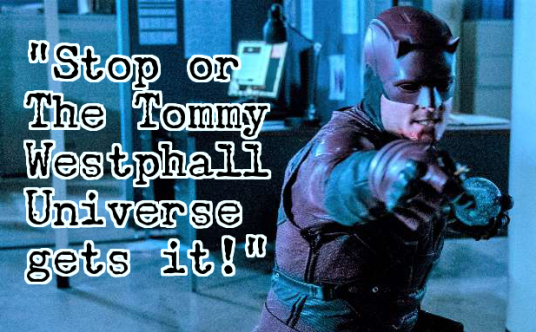 Bullseye’s favorite song is “Take Me Out” by Franz Ferdinand, & his favorite store is Target.

END_OF_DOCUMENT_TOKEN_TO_BE_REPLACED

Two big Marvel releases happened on September 7! I don’t have a PS4, however, so no Spider-Man for me. That leaves me with … RUH-ROH! I ran a poll on The Twitter to decide whether I ought to subject myself to Iron Fist season two, & seventy-one percent of the voters were sadists.

Or are they? I was expecting to despise this based on its pedigree & underwhelming trailer, but it’s actually not bad? This was actually a bit of a disappointment as it forced my to revise the preliminary draft of schadenfreude I’d written. I’d originally planned to just watch the three episodes IMDB told me Alice Eve was in so Netflix will be forced to put the show out of our misery, but then it turned out she’s in the whole shebang. This was a wise move on the series’ part, as she’s a big reason this season succeeds. Step into the sun chamber for SPOILERS!

END_OF_DOCUMENT_TOKEN_TO_BE_REPLACED

This week you’re getting a two-for-one review of Teen Titans Go! To The Movies (that exclamation mark in mid-title vexes me) & the first season of Cloak & Dagger! The former has fewer spoilers than the latter.

I remember when there was backlash against the Teen Titans cartoon for deviating from both the comics & the DCAU. After that wormed its way into audience’s hearts, there was backlash against Teen Titans Go! for seemingly disrespecting its predecessor. (I find it to be a better show than it gets credit for, though I only watch it infrequently.) Now we’re all united in hating the Titans trailer because it’s awful. (Does this mean we’ll have fond memories of Titans by the time the next reboot is teased?) Teen Titans Go! To The Movies makes DC Universe’s flagship series look even more embarrassing because it’s legitimutantly fun!

END_OF_DOCUMENT_TOKEN_TO_BE_REPLACED

San Diego Comic Con 2018 just happened. (As expected, nobody cared about “Fiction & Felines!” while it was occurring.) I have opinions. Armchair coverage & the possible spoilers associated therewith happen below.

The biggest news out of this year’s SDCC is … Cutthroat Island is finally getting toys!  Thanks to Blitzway, you can own a Hot Toys-style replica from the film that sunk pirate movies until until Pirates of the Caribbean: Curse of the Black Pearl surprised everyone! Congratulations, Geena Davis!